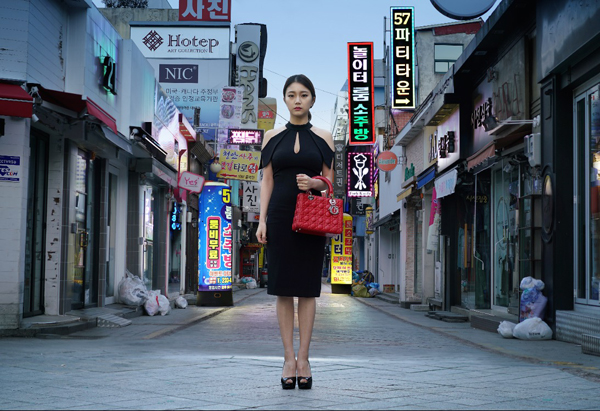 A work by visual artist Lee Wan was recently taken down from a Christian Dior exhibition in Seoul after controversy erupted online, as netizens condemned Lee’s work and the brand for misogyny.

“I acknowledge that my work aroused such controversy among people and I feel responsible for it,” Lee told the Korea JoongAng Daily in an exclusive interview last week. “However, I want to say that my intention is nothing like that.”

Indeed, discussion with the artist revealed that while he intended his piece to raise questions on society, his target was not gender roles or sexism.

Titled “Korean Female,” Lee’s composite photograph piece shows a woman wearing a black cocktail dress that seems out of place with the setting of a street lined with signboards, one of which reads “Soju Room,” which many viewers took to mean a hostess bar. The woman holds a red Lady Dior bag and wears an expressionless face.

“Also, the controversial ‘Soju Room’ signboard is not for a hostess bar but a karaoke where many undergraduate students go to sing and drink soju,” he explained. “The reason I chose the street is that I wanted to manifest typical Korean modern streets with signboards hanging in disarray.”

Lee’s artwork was being exhibited at the brand’s flagship store in Cheongdam-dong, southern Seoul, as part of the worldwide “Lady Dior as Seen By” exhibition, which centers on the brand’s signature Lady Dior handbag. But after the controversy broke out the company apologized and said it took down the work.

Because of the work’s title, many netizens interpreted the work as a comment on Korean women in general. Moreover, due to the prominence of the “Soju Room” sign, many viewers interpreted the setting as an adult entertainment district and the woman as a worker at a hostess bar.

As a result, netizens began to post furious comments and questions about the work across social media, debating whether the photograph was supposed to show that Korean women sell sex in order to buy luxury bags. Lee was branded as misogynistic while Christian Dior was criticized for ridiculing Korean consumers.

But the luxury brand denied any negative intent.

“Christian Dior has been making efforts to emphasize women’s progressive spirit, encouraging their self-esteem and to help develop the philosophy of having respect toward women and extension of their authority,” the company said in an April 12 press statement. “Enjoying art and culture and supporting women’s beauty and their happiness are the highest values that Christian Dior pursues.”

As for Lee, his oeuvre of sculpture, installation art, photography and more have never featured such misogynistic elements, or addressed gender or sex issues. Rather, the artist has long focused on today’s economic and social systems that people take for granted.

For example, his “Made In” series, which won the 2014 Leeum Artspectrum Award, involved the artist making numerous consumer goods by himself. For sugar, he grew sugar cane and eventually processed it into pure sugar, documenting the process on video and finally exhibiting the final product and video. 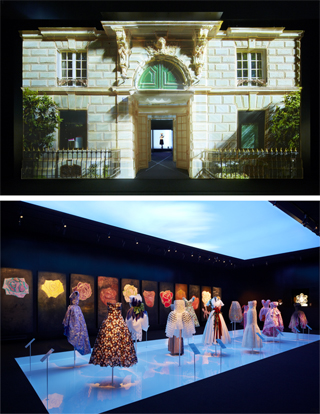 The experiment is meant to show how the simplest everyday products have changed with the advent of free trade and the division of labor, involving complicated political, economic and social factors. In a recent project, Lee grew his own hair in order to make a wig. Wigs were a major export of Korea in the past. The work was meant to question the capitalist system, especially in Asian countries including Korea that went through colonization and liberation in the early 20th century.

So Lee’s work for the Dior exhibit is more likely connected to what American economist Thorstein Veblen described as “conspicuous consumption,” or the social stratification according to aesthetic taste that French sociologist Pierre Bourdieu wrote of in “La Distinction.”

The work is more of a commentary on the consumption of luxury brands, but then why did the artist title it “Korean Female?”

“Actually, the emphasis is not on female but on Korea,” Lee explained. “All countries have conspicuous consumption, but the rate of consumption regardless of income level is exceptionally high in Korea.”

“I think it is due to the harsh competition to upgrade one’s image,” he continued. “So appearance becomes important, and luxury goods promote one’s social status. Since the product is a handbag, I cast a woman. If it were a watch or a car, I might have cast a man.”

Even if the did not anticipate his work would spark such controversy, the title of “Korean Female” was bound to rekindle an ongoing conflict among internet users in Korea.

Korean online culture has a long history of misogyny and stereotyping women, with common nicknames for women such as doenjang (fermented bean paste) woman for someone who only buys luxury brands and kimchi woman for someone who depends financially on men. This in turn has sparked outrage among female netizens toward men and these negative views of women.

Thus, the satirical-looking photograph with the title “Korean Female” was bound to reopen this fight.

As images of Lee’s work spread online, hundreds of thousands of comments were written about it, with many women asking questions like: Why is the artist generalizing this woman as a Korean female, when I have never bought a luxury brand? Why do people think that women buy luxury bags by selling sex, not with justifiably earned income? Mostly the censure was directed at the unfair portrayal of women.

However, on the other side, men defended this classification of Korean women, saying that’s what they are. In response, female netizens asked whether men are alright with being classified as criminals, since so many news headlines every day feature male criminals.

Amid the fracas, Lee was labeled as an artist with a negative view of women, but no media asked the artist seriously about his intention.

Instead, an interview he gave long before the recent controversy was repeatedly quoted in the news. The video of Lee explaining his work in vague statements was uploaded by Christian Dior to help people understand the artist’s work.

In the interview, Lee mentions that his photo was made by putting together different components, which some took to mean that he intentionally included signboards for adult entertainment venues. This cemented the view of Lee as a misogynist.

“My work has given some men the chance to attack women, and make distorted generalizations of women,” Lee said of the controversy.

“I just want people to know that that was not my intention,” he added. “To clarify the problematic interview about the composite photograph, the signboards are actually untouched. I just took pictures of the same street 15 times at day and night and put them together. By doing so, the focus of the picture is not on one point but equally distributed.” 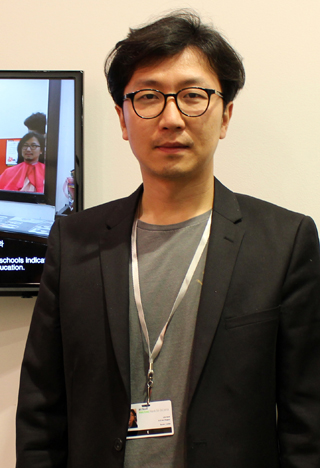 By looking at the other pictures taken of the iconic street, one can see it’s true.

“Chungjang-ro is a famous street for having fun with friends,” said a student from Gwangju who is not acquainted with the artist. “Also, the ‘Soju Room’ is where you can sing and drink soju at the same time. I have been there a lot with my friends as well.”

Then, the question becomes whether the Korean branch of Christian Dior could have foreseen such a misunderstanding. Even if it is not misogynistic, the work does not view luxury consumption positively. So why did the brand accept his work for the exhibition?

Phone calls to the company’s office in Korea were not returned.

As the controversy flared, Christian Dior apologized but did not offer an explanation of the artist’s actual intent or clarification on how the piece was chosen for the exhibition.

According to Lee, the artist collaboration project was led by the Christian Dior head office in Paris. Also, the decision to include his piece in the exhibit was made at headquarters.

“I really did not expect the response to my work to be so contentious. I only thought that Christian Dior might not like it,” Lee said. “However, the brand has done multiple art projects and they know that their products are expensive as well, so they are open-minded.”

“Headquarters did not like my work being taken down, but the Korean branch asserted that the circumstances here are very serious,” he added.

In other words, the luxury brand coolly accepted the negative critique in Lee’s work and showed the respect to the local artist, but ironically it has drawn the ire of customers here as a result.

Now, Dior is at risk of losing the reputation it has built.

The problem seems to be a lack of communication between headquarters and the Korean branch. The head office does not seem to understand why Lee’s work created controversy. Meanwhile, the Korean branch does not seem to be actively trying to clarify the issue. Instead of taking the work down, the company should invite enraged customers and netizens to a conference with the artist to explain his work and intentions.

If the problem is not solved, this case will go down in history as one of the worst outcomes of collaborations between companies and artists.