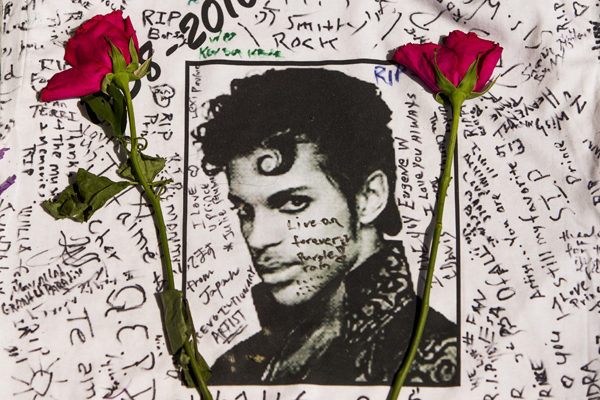 Flowers lay on a T-shirt signed by fans of singer Prince at a makeshift memorial place created outside the Apollo Theatre in New York on Friday. [AP/NEWSIS]

When the music superstar died at age 57, it was in the same suburban Minneapolis studio compound where he had lived for years. He could have opted for the glamour of either coast but stayed home, where fans occasionally saw him in local nightclubs, a record store, or just bicycling near Paisley Park.

“He was everything here,” said Mark Anderson, 43, a longtime fan who estimated he saw at least 30 Prince shows and would bring his teenage son from nearby Eagan to see Prince’s occasional late-night jams at Paisley Park. “He was more than a musician. He was family.

“I think a lot of fans feel that way.”

Crowds continued flocking Saturday to pay respects at Paisley Park. An autopsy was conducted Friday, but officials said it may be weeks before results are known. A group of Prince’s “most beloved” family, friends and musicians celebrated his life in a small, private service on Saturday.

Prince’s fame made Minnesota feel good about itself.

In the wake of his death, fans here have recalled how the Oscar and seven-time Grammy winner put the sleek “Minneapolis Sound” of the 1980s on the national music map.

“When you think of Minneapolis, you automatically think of Prince,” said Jen Boyles, 37, a longtime Twin Cities music journalist.

St. Paul Mayor Chris Coleman was among thousands that turned up Thursday night outside of First Avenue, the downtown Minneapolis nightclub Prince made famous with his hit 1984 movie “Purple Rain” and where part of the movie was set and filmed.

“Think about what Prince has meant to so many people across the globe, not to mention folks in the Twin Cities,” Coleman told the Star Tribune. “Prince made us cool. Prince really made his mark from here.”

Even the local sheriff, at a news conference on Prince’s death, reminded reporters that the purple-loving megastar was, at heart, a local guy.

“This is a tragedy for all of us. To you, Prince Rogers Nelson was a celebrity. To us, he’s a community member and a good neighbor,” Carver County Sheriff Jim Olson said Friday.

Minnesota is a rich musical state that has produced Bob Dylan, Judy Garland, Eddie Cochran and the Andrews Sisters. But they all moved away.

Bob Fuchs, the manager of Electric Fetus, a south Minneapolis record store where Prince would browse without fans bothering him, rated Prince equal to Dylan. Prince’s decision to stay home, Fuchs said, made him special.

“As far as hometown musicians who still live here, that puts Prince at No. 1,” he said.

Lars Larson, who worked as security for Paisley Park on and off since 2001, said he thinks Prince cherished small-town life.

Besides opening his 65,000-square-foot Paisley Park recording complex in 1987 in Chanhassen, a town of nearly 23,000 people about 20 miles southwest of Minneapolis, Prince also owned a lot of undeveloped land in the suburb, Mayor Denny Laufenburger said.

“Maybe to a certain extent he considered this a little bit of peaceful repose,” Laufenburger said.

Heather McElhatton of Minneapolis, who worked as a set decorator for Prince video shoots at Paisley Park from 1988 to 1998, said Prince had his pick of locating his $10 million studio but chose to remain in the Twin Cities.

“He could have put Paisley Park anywhere. He could have put it on the moon and musicians would have rocketed up to record with him,” McElhatton said. “He never lost touch with who he was or his roots.”