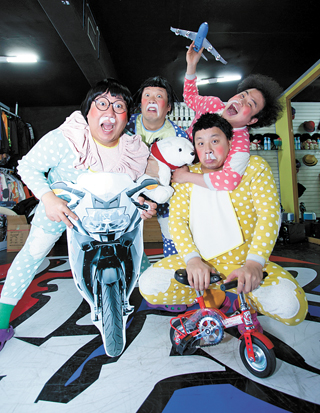 The Ongals comedy troupe is made up of, from left, Cho Jun-woo, Choi Ki-seop, Cho Su-won and Chae Kyung-sun. [JEON HO-SEONG]

A Korean comedy troupe the Ongals can’t speak a word of English. But about five years ago, the quartet bravely set off overseas and has been generating big laughs ever since.

The group’s name comes from the Korean word for the babbling of a baby. As the name implies, the Ongals only babble on stage - each member wearing bright polka-dot pajamas and bibs - while amusing audiences with impressive slapstick, miming, beatboxing and juggling in an always-comical way. It may seem the Ongals were on a roll in Korea so they decided to take the act abroad, but in fact, it was the opposite.

Four comedians teamed up and formed the Ongals for a skit on KBS’s sketch-comedy show “Gag Concert” in 2007. At first, the four bulky men doing a circus-like performance, each wearing tight long johns and bibs with a white smear of paint underneath their noses to make them look like drooling adult babies, was a refreshing source of laughs for Korean audiences. But the skit only lasted six months. When this happens, it’s natural for comedians to form a new team and a new skit. But the Ongals took a different tack by leaving behind the local silver screen and going abroad.

Finally noticing their contribution in popularizing Korean comedy abroad, the Korean government awarded them a commendation signed by the minister of culture, sports and tourism last year, and they became the first comedians to perform at the Seoul Arts Center.

But leaving their glory behind, the Ongals once again headed overseas, and last Monday, they performed at the Sydney Opera House for the 12th Sydney Comedy Festival Gala.

The group’s overseas publicist, the Korean Artist Development Agency (KADA), said Wednesday that all 2,000 seats at the opera house were full and that the team was surrounded by local media after the show. After the gala, the group had seven more performances scheduled in Sydney through today.

The Ongals are featured in the Sydney Morning Herald on April 19 after their show at the Sydney Opera House. Above right: The comedians pose for a photo with other international comedians at the Edinburgh Festival Fringe last year. [KOREAN ARTIST DEVELOPMENT AGENCY]

Before Sydney, the Ongals performed at this year’s Melbourne International Comedy Festival, “confidently as invited guests for three consecutive years,” according to the KADA, and later this month, the team will fly to the Philippines for a show. This summer, they’ll be performing at the main venue for this year’s Edinburgh Festival Fringe, and their goal is to break into London’s West End and show that their unique style “does not have language barriers.”

Prior to their departure, the JoongAng Sunday, an affiliate of the Korea JoongAng Daily, sat down with the four comedians - Cho Jun-woo, Cho Su-won, Chae Kyung-sun and Choi Ki-seop - for an interview last month at their rehearsal studio in Sadang-dong, southern Seoul.

“We only know two foreign comedians, and they are Mr. Bean and Charlie Chaplin. Because they don’t talk, everyone around the world knows them. That’s why we don’t talk, either,” said Cho Jun-woo, adding that the group’s slogan is, “English is not the lingua franca, but laughter is.”

Although these men dress and sound like babies, their circus stunts, beatboxing and miming are second to none. According to the members, although their show looks carefully planned out and orchestrated with the help of expert directors or producers, it in fact was never clearly planned. When they decided to go abroad, the four members said they just went ahead without any concrete plans.

“But we had a special turning point,” Cho Jun-woo said. “When we were working for ‘Gag Concert,’ the members went to volunteer at a welfare community center that was looking after disabled children in the neighborhood. Since many of the children were physically and mentally disabled, they had to watch us perform while lying down on the floor.

“But when we started to perform, the kids who looked as though they wouldn’t get what we were doing began to respond,” he continued. “That’s when we realized that what we do allows us to connect with those we normally can’t communicate with.”

The members said the experience gave them courage to perform in front of those who speak different languages. In 2009, they courageously knocked on the door of the Edinburgh Festival Fringe, but fearing their inability to speak English might hinder their chances, they hired an interpreter instead of just babbling in front of the organizers. The members say the effort “backfired” and that they “failed to impress the foreign organizers.”

Having nowhere else to perform, the Ongals said they took their act to the streets, making it through the day by buying hamburgers with the coins thrown into their hat by passersby.

“Because we were the first Korean comedians trying to enter the global market, we had no one to ask, no examples to follow,” Chae said. “We heard that there’s government support for teams that are going to the Edinburgh Festival Fringe, so we applied for it, but the officials rejected us stonily, saying that comedy is not included in the genre of arts.”

When the Ongals were about to lose all hope in a foreign land, they happened to watch a Japanese comedy team they insist wasn’t even funny, but was making the audience laugh out loud. The Ongals said they saw a silver lining.

The next year, by sticking to their babbling, the Ongals officially performed at the Edinburgh Festival Fringe. Witnessing the group’s success abroad, Chun Hye-jeong, CEO of the KADA, who was working at the Korean Cultural Center in London at the time, helped them get invited to various festivals in London, such as the Mayor’s Thames Festival. According to Chun, the key factor she saw in the Ongals was “the destruction of genre.”

“There’s always been so many Korean teams trying to enter the global theater world, but in fact, categories that define them such as plays, dance and so on act as a barrier in such an era where boundaries between genres are becoming indistinct,” she said. “In that sense, the Ongals’ show, which is not defined by one genre but fuses comedy, circus, beatboxing and so on, is the reason why they are so popular at various foreign festivals these days.”

According to the members, they are not that famous in Korea, and only their landlords recognize them from their TV days. But in Australia, ever since the Melbourne International Comedy Festival Gala was broadcast on TV last year, people there began to recognize the Ongals on the street. In fact, more tickets were sold for the Ongals’ show in Melbourne earlier this month than for their show in Seoul last month at the National Theater of Korea.

“Koreans analyze everything, and they even do so for comedy,” Cho Su-won said. “When the comedians display a show that they predicted, they criticize it saying it’s trivial. But from our experience, we noticed that comedy, in foreign countries we’ve performed in, means harmony. Although they know what we are going to do or what our next move is going to be, they just enjoy it as it is. When they witness harmony between ‘something they can’t do’ and ‘something we can do’ on stage, they seem to react to it and laugh with us. I think Koreans have closed minds in that sense.”

That is why the Ongals said they gave up performing on “Gag Concert.” They tried doing another skit on the show, but after six weeks, they were told that their act would not be included anymore.

“We realized then that the kind of comedy we pursue doesn’t really fit into the atmosphere in Korea and the culture of broadcasting,” Cho Jun-woo said. “We needed a live theater and new audience rather than playing on a small screen and being watched by the same audience.”

Choi said the way Koreans and foreigners view comedy is also quite different.

“When Koreans watch a foreign comedian’s show, for instance, they say, ‘Why are they doing the same thing over and over again?’ But I believe as these comedians go over that one show, the work ripens and deepens, and although it’s the same thing, it becomes funnier every time,” Choi said. “As Korean comedians, we have a habit of trying to create something new every time, and foreign comedians ask us how it’s possible and if we are on drugs or something.”

Since the Ongals’ performance is a show that “transcends genres,” according to the comedy troupe, the Park Geun-hye administration, which has been emphasizing the importance of cultural convergence, began showing interest in the group as well.

Last February, the Ongals held a showcase at the Culture Creative Convergence Center, which is said to have made President Park laugh heartily. That led the Ongals to also get invited to perform at the luncheon hosted by the president and attended by 17 financial and industry leaders at the Blue House last July.

“When we performed in February, President Park asked me how I did the balloon stunt, so I said I’ll tell her if she invites us again some time, and she really did,” Cho Jun-woo said.

“When we went to the luncheon, all the famous people we see on the news were all there,” Choi said.

“President Park told the leaders that she invited us so that they could have a laugh together, explaining that there are not many chances to laugh at their age,” Cho Su-won said. “I think she was concerned about how the leaders would take our show. She looked more nervous than we were.”

The troupe has the ultimate goal in mind of making it to the West End in London, achieve recognition there and then finally build a Korean comedy center in Las Vegas so that “K-comedy” can spread worldwide the way K-pop has.

They also have a more peculiar goal in mind.

“We hope to go to remote areas as well,” Cho Jun-woo said. “We created our show believing that it speaks to anyone, anywhere, so we have to check whether we can appeal to indigenous peoples as well. Even if it means we have to juggle with stones on dirt and beatbox using a megaphone, we want to make sure we can bring laughter to everyone around the world.”