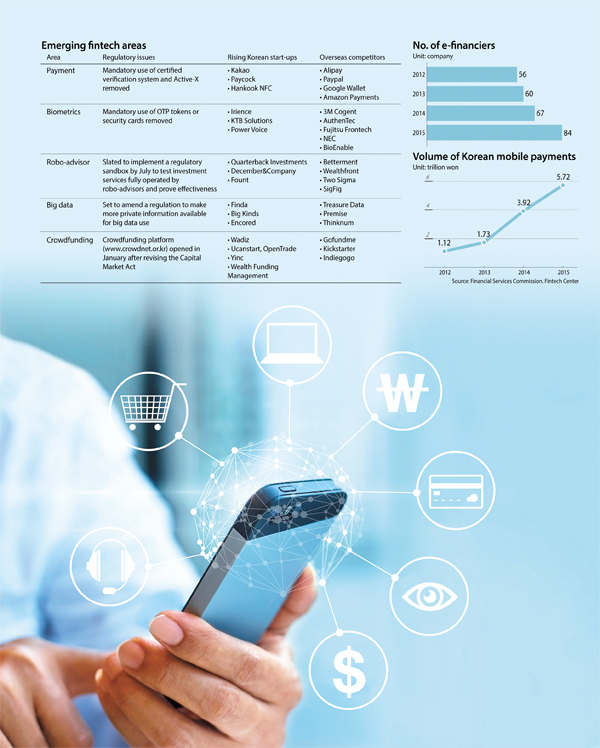 Up until last year, Jeong Hee-suk couldn’t drum up any interest with banks or credit card companies for his speaker verification algorithm.

When the program developer had meetings to try to market his algorithm, he was asked the same question: “How can you comply with the face-to-face identity verification regulations?”

“At the time, consumer convenience was not an issue,” Jeong said.

He has been developing the speaker verification algorithm since early 2000, when a number of voice recognition ventures began springing up, but he is one of the few that survived.

“Security was put before convenience, which required consumers to go back home and bring their identity cards or whatever,” Jeong said. “Remote verification was unimaginable, so many of my colleagues gave up.”

The law mandating that all financial transactions be done using real names and face-to-face identity verification was the biggest challenge for many biometrics developers like Jeong until last year.

The Korean financial regulator made a bold decision to ease the two-decade-old regulation in early 2015. Since then, Jeong has been bombarded with phone calls from commercial banks and credit card firms to discuss applying his voice verification algorithm to mobile banking or payment services.

With the removal of the restriction, Korea is moving toward a new era of fintech. And two pillars of the fintech industry will be remote personal identity verification and big data. A number of start-ups with fresh technology enabling financial services based on the two core concepts are mushrooming as related regulations are starting to be removed.

The financial regulator had no choice but to allow verification without physical face-to-face proof in May and came up with five alternatives - submission of a copy of a resident card, a video call, verification via post, checking with an existing bank account and biometrics. Consumers are required to provide two options.

Along with the five options, restrictions on the use of personal information of multiple consumers were hurdles for fintech firms that needed credit information to offer new financial services such as lending.

The regulator loosened the Use of Credit Information Act last week, allowing businesses to tap into personal information by encrypting the information to make it anonymous.

After the reforms, the Financial Services Commission (FSC) has designated big data, robo-advisers and biometrics as the most promising fintech areas in need of new investment and technology development.

FSC Chairman Yim Jong-yong has been highlighting the three areas as the hub of Korea’s fintech industry.

“Korea is doing pretty well in the biometrics area,” said Kim Hyoung-joong, a information security professor at Korea University. “But biometrics technologies need to be commercialized in the financial sector.”

Technologies for iris and fingerprint verification have advanced significantly, but traditional financial institutions are not yet open to adopting them as verification tools, the professor explained. “Biometrics firms need to get fees, for example, per verification, and reinvest them into developing better technologies to sustain their businesses. But my concern is that the banking industry is too conservative to accept them,” he said.

State-owned Woori Bank and the Industrial Bank of Korea are currently trying iris verification at one or two ATMs.

“Using part of your body isn’t easy yet, especially for financial transactions, as public awareness of biometrics is still low,” said a spokesman for a commercial bank.

Shinhan Bank is adapting itself to the biometrics trend starting with fingerprint verification. It launched Sunny Bank, the nation’s first mobile banking system, with no requirement for a one-time password, authenticated certificate or residential number.

It has also applied vein verification to its so-called Digital Kiosk, an unmanned banking system that will soon replace bank branches. The Digital Kiosk is on trial at 24 branches across the country.

“Since the biometrics industry is relatively less restricted than other fintech fields like mobile payments, robo-advisers and big data, biometrics firms are getting attention,” said Lee Young-hwan, an IT finance professor at Konkuk University.

Robo-advisers are another area of fintech the Korean government wants to push. The regulator announced it will allow fund management by computer programs at designated institutions from July.

“Some say Korea excels in robo-adviser technology compared to other Asian economies like Japan and Hong Kong,” Lee said. “Korea has a faster infrastructure for transactions of futures, options and stocks than those Asian markets … but Korea is behind these countries in artificial intelligence and quant technology. Artificial intelligence [AI] technology hasn’t reached a level that attracts investors.”

It will take a long time to develop algorithms for robo-advisers using AI technology combined with financial analysis methodologies, he added.

Jung Yoo-shin, a professor at Sogang University’s business school and head of the Fintech Center, said, “Big data is key in developing such [data analysis] algorithms and exploring new fintech-enabled financial services because quick and accurate analysis of massive amounts of data is most crucial in understanding consumers and offering accurate and quick services.”

As the global economy has become a consumer-driven economy with technological developments, the amount of data waiting to be analyzed has exponentially increased, Jung said. Such data ranges from quantitative data collected by supply-side to nonfinancial qualitative data that consumers produce every day via social media and mobile devices.

“Even if a fintech start-up has developed a good analysis algorithm, it can’t offer quality services if it doesn’t have enough data that is also well analyzed.”

For conventional financial institutions that put their top priority on “low risk,” the latest fintech fever is an irresistible trend that is hard to ignore.

Woori Bank adopted a service developed by a start-up that offers business advice for its Wibee Bank mobile banking service. The service targets young customers who are usually denied loans because they have little or no financial history. The service, named Wibee Talk, is now being advertised on TV featuring popular comedian Yoo Jae-suk.

Since opening a fintech lab in April, the first in the traditional financial sector, Woori Bank has supported as many as 80 start-ups. The bank purchased the business models of four of the firms, signed MOUs with eight and made a 1 billion won ($875,000) investment in an iris verification developer.

Shinhan Bank is operating Shinhan Future’s Lab, which selects start-ups with promising technologies and helps them develop services that the bank might utilize. After supporting seven start-ups last year, it invested around 2 billion won in four of them. The bank is currently collaborating with 16 new start-ups.

The bank recently signed an agreement with one of the companies to co-develop a robo-adviser service.

“Our fintech acceleration program differentiates from that of others in that we publicly recruit start-ups that we are going to work together with in developing technologies and applying them to our services,” said Jeon Seong-ho, head of the smart finance team at Shinhan Financial Group.

“It is true that traditional financial institutions’ attitudes have changed,” said a technology developer at a fintech start-up who requested anonymity. “It took more than five years for me to have a meeting with bank people. Thanks to the government’s policy, we are getting easier access to meet with them.”

Another start-up owner, specializing in information security, pointed out that some banks’ IT development staff are difficult to reach and tend to reject start-ups ideas.

“They are too demanding in terms of security,” he said. “We think security is crucial, but the banks should be more flexible.”

Experts make a similar point. “For fintech growth, excessive security cannot invite innovation,” Kim of Korea University said. “Although fintech firms like Paypal have higher accident ratios than Korean banks that demand using the Active-X security program and authenticated certificates, the payment service is being run well in a safe manner, which means the company is dealing well with accidents.”

To help boost the fintech sector, the regulator also needs to improve its punishment practices for such financial accidents that are going to increase as new fintech services are going to rise, the professor underlined.