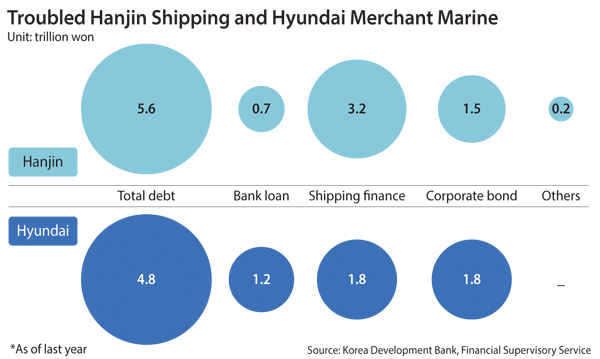 After Hanjin Group Chairman Cho Yang-ho decided to give up control of Hanjin Shipping last week, the group is in a kind of mourning period - but is also expecting some positive impact.

Korean Air, for instance, is the no.1 shareholder of Hanjin Shipping with a 33 percent stake. It will no longer have to try to bail the company out.

On Friday, the nation’s top shipping company held a shareholders meeting and agreed to push ahead with self-rescue measures, according to a regulatory filing. Should creditors including a handful of commercial banks issue an approval, the shipper’s maturing debts will be rolled over, and part of them will be rescheduled starting as early as the beginning of May.

Chairman Cho offered to relinquish management control but which creditor will take it has not been determined yet.

Cho has long been possessive of Hanjin Shipping. Before he took over ownership from former chairwoman Choi Eun-young, widow of his younger brother Su-ho, in 2014, he lent 250 billion won ($217.5 million) to the company, issued 400 billion won worth of new shares and also purchased perpetual bonds worth 220 billion won. Cho dreamed of combining transportation-related businesses on land (with subsidiary Hanjin, a logistics company), sea (Hanjin Shipping) and air (Korean Air).

But with miserable conditions for the shipping industry worldwide, including slumping economies in Europe and China, overall demand for the business has been shrinking. Competitor Hyundai Merchant Marine (HMM) announced earlier in the month that it will jointly run the company with creditors as part of a restructuring.

If Cho’s relinquishing of control of Hanjin Shipping is approved, it will help Hanjin Group’s key business, Korean Air, the nation’s no.1 air carrier. It lent Hanjin Shipping 250 billion won before Cho became chairman and raised 444.8 billion won worth of funds by issuing new stock. Because of rumors that Korean Air might continue to support Hanjin Shipping, the credit rating of the company, which was A in 2013, was lowered to BBB+ last month by the Korea Investors Service (KIS).

“If Korean Air gives up its control of Hanjin Shipping, it will positively impact the company’s credit rating as many negative issues like giving more financial support to Hanjin will have gone away,” said Kim Yong-gun, head of the corporate evaluation division of KIS

But as the nation’s two major shipping companies - Hanjin and HMM - relinquish management control to creditors, it is obvious that investors holding the companies’ bonds are going to suffer. According to financial institutions on Sunday, the amount of corporate bond that the two companies sold to investors in Korea and overseas is nearly 3 trillion won.

Since about 360 billion won worth of bonds from HMM and 221 billion won from Hanjin expire this year, creditors and investors are expected to discuss whether they will extend the deadline in meetings scheduled next month.

Meanwhile, shareholders related to Hanjin Group Chairman Cho have come under fire for offloading shares. According to the FSS, Choi Eun-young, former chairwoman of Hanjin Shipping, and two of her daughter sold all their shares from April 6 to 20. Choi sold 370,569 shares of Hanjin Shipping and her two daughters sold 298,679 shares, which accounted for about 0.39 percent of all the company’s shares.

The chairman’s sister-in-law might have been trying to avoid potential losses after learning that Cho would give up control of the company, which was only announced publicly on April 22. That would be inside trading. Hanjin Shipping shares dropped 7.3 percent on Friday from the previous session to close at 2,605 won per share.

But Eusu Holdings, which Choi is chairwoman of, said Choi followed the rules. It claimed that 204,000 shares were sold in April 2015 and the information was just updated last week by the FSS.

“The restructuring issue for Hanjin became sensitive news lately, but Choi has been consistently selling her shares since last year after seeing some dubious conditions in the industry,” said a spokesman of Eusu Holdings.

The Korea Exchange and FSS said they will review Choi’s transactions.