Foreign veterans return to the sites of their battles

Foreign veterans return to the sites of their battles 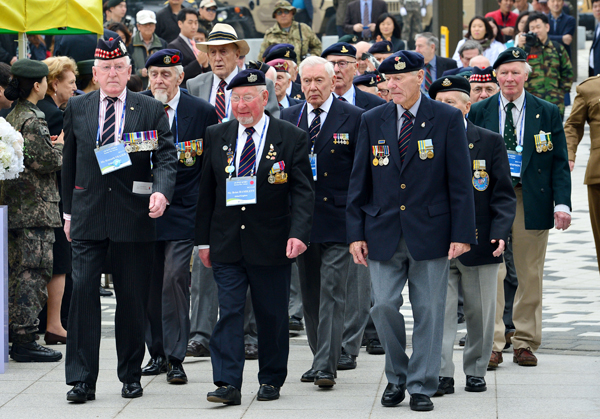 British veterans who fought in the 1950-53 Korean War march at the Gloster Hill Memorial Park in Paju, Gyeonggi on Friday during an annual memorial service highlighting their fight in the Battle of the Imjin River, which took place from April 22 to 25, 1951. [NEWSIS]

PAJU, GYEONGGI - Thomas Clough remembers the first time he step foot on Korean soil after sailing thousands of miles from home in the U.K. It was 1950, the first phase of the three-year Korean War that would turn the country into a vast wasteland.

For Clough, who was 19 at the time and serving as a gunner with the Royal Artillery, that first step was like “landing on the moon.”

In April 1951, Clough’s unit joined forces with the Gloucester 1st Battalion of the 29th Infantry Brigade of the British Army near the Imjin River in Paju, Gyeonggi, in an effort to fend off nearly 30,000 Chinese forces marching to capture the capital of Seoul.

The bloody battle lasted three days and three “very long nights,” he recalls, with the brigade suffering 1,091 casualties, or about one-fourth of its entire manpower. Victory went to the Chinese in what would later be known as the Battle of the Imjin River.

Hundreds of British soldiers, including Clough, were taken to a prisoner of war camp in North Korea run by the Chinese.

Sixty-five years later, Clough returned to the battlefield 24 miles northwest of Seoul. It was his fourth visit since the end of the war, the first since 2014.

Nothing was the same, to say the least. “When we were released from [the Chinese prison camp in] North Korea in 1953,” says Clough, “Korea was absolutely flat. Devastated! Now, it’s entirely different. I’m amazed.”

Clough, now 85, was part of a group of 30 British soldiers who visited the Gloster Hill Memorial Park in Paju last Friday during an annual event commemorating their duty.

The program is led by Korea’s Ministry of Patriots and Veterans Affairs, who since 2010 has been inviting hundreds of war veterans of the Commonwealth to raise awareness here of their service.

This year, a total of 59 veterans from the U.K., Ireland, Canada, Australia and New Zealand were brought for a week-long tour around national memorial parks, along with 48 of their family members.

They will leave Tuesday.

“The Second World War was not long over and Britain was exhausted and impoverished,” said Earl Howe, British minister of state for defense, on Friday during public remarks in Paju. “Yet she immediately responded to the call providing strong navy, army and air forces, becoming the second largest contributor [to the Korean War] after the United States.”

He added 82,000 service personnel were deployed, approximately 1,000 of which would be killed.

Asked what he remembered the most about the battle 65 years ago, Clough, who spent two and a half years at the Chinese prison camp, is quick to answer: “streams and streams” of Chinese soldiers, he says, that never seemed to end.

Yet decades later, the only physical vestige of war left on his body is a few indentations on his wrists, he says as he gently rolls up his sleeves.

“I was handcuffed for six weeks,” he recalls. It was punishment for trying to escape the camp. “Every day they would come in,” he remembers, “and tighten it a little bit more.”