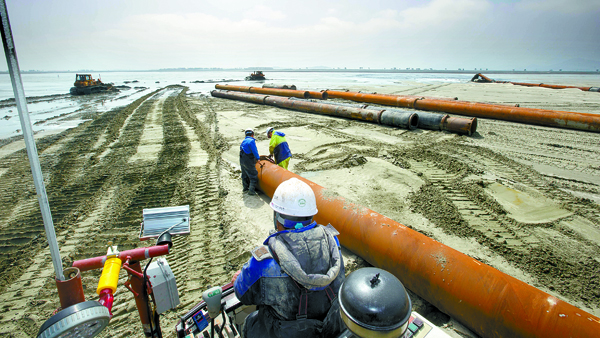 Workers at the Saemangeum development project’s construction site in Buan County, North Jeolla, use soil, pumped from the bottom of Saemangeum Lake via steel pipes to reclaim land. The project will need 758 billion cubic meters (27 trillion cubic feet) of soil, which is 14 times bigger than the volume of Mount Namsan in central Seoul. [OH JONG-CHAN]

It’s been 30 years since the Saemangeum development project began, an ambitious attempt to construct a 33.9-kilometer (21-mile) seawall, the longest in the world, extending from the city of Gunsan to Buan County in North Jeolla to reclaim land for industrial and agricultural use.

The project included a lake inside the wall to supply freshwater to industries, farms and cities that would be built inside it. April 21 marked the 10th anniversary of the construction of Saemangeum Lake.

A total of 9 trillion won ($7.9 billion) was invested in the project, and an additional 17 trillion won is planned. The cost of the project outstrips the 22.2 trillion won spent on the major four-rivers restoration project by former President Lee Myung-bak.

It is the biggest national project ever in Korean history.

On April 8, the JoongAng Ilbo visited a construction site at the bottom of the Dongjin River in Buan County. A sign reading “Saemangeum, the Land of Hope,” erected by the Korea Rural Community Corporation, welcomed the team.

Inside the seawall, embankments were built on the sides of a mudflat. On the mudflat, long steel pipes had been laid to pump mud from Saemangeum Lake. Gray muddy water poured from the pipes, and bulldozers were busy moving from one place to another tamping down the grounds.

Construction workers used mud from the bottom of Saemangeum Lake to fill the space between the land and the embankment to reclaim land for agricultural usage.

“This part of the land was designated for the agricultural and biological industries,” said a worker from the Saemangeum Development and Investment Agency, who was guiding the reporting team. “An industrial complex for the horse-race industry is planned, too. Because we are sucking up the mud using vacuum pipes, there’s no need to worry about the lake getting contaminated.”

He told the team that the construction of 90 percent of the embankment, which will be about 56 kilometers long, was complete.

The OCISE Corporation, a subsidiary of OCI Corporation, which builds power plants, and the Gunsan City Gas Corporation are based in the complex.

With 60 companies signing the memorandum of understanding to move into the industrial complex, the place should be pretty busy. But in fact, it is almost empty. Only five of the 60 companies have followed through. Few cars can be seen.

When the team visited the construction site, the cities, farms and industrial complexes cited in the Saemangeum development project’s blueprint were nowhere to be seen. It’s been 30 years since construction began, but Saemangeum is basically a lake with seawater flowing in and out, and lots of mudflats with reeds swaying in the breeze.

The first development level for the reclaimed land in Saemangeum is supposed to be completed by 2020. Level two of development will continue soon afterwards, with 9 trillion won to be invested. The completion date of the second level is still undecided.

According to a government development plan revised in 2014, 59.5 percent of the Saemangeum project’s budget will be funded through 2020, and the remainder will be granted in 2021.

Since 9 trillion won has already been invested, with an average of 612.5 billion won invested per year, it will take about 30 years more, starting from 2017, for the remaining 17.3 trillion won to be invested.

“The investment plan for the Saemangeum development project is a promise made to the citizens,” said Jang Sun-ung, secretary of the Saemangeum Development and Investment Agency, in an interview, “and once the construction of infrastructure is completed, investment in the project will be accelerated.”

Water pollution in Saemangeum Lake is the most serious problem.

In order for the lake to supply water to farms, its water quality has to be at least grade four. To supply water to cities, it has to be at least grade three. To meet such criteria, the government invested about 1.5 trillion won to improve the water quality of the lake and is planning to invest 1.4 trillion won more through 2020.

But the chemical oxygen demand (COD) of one part of the Mankyeong River, which feeds into the lake and also runs next to agricultural land is 10.7 parts per million - grade-six water quality, not even close to grade four. The COD of the Dongjin River, which also feeds into the lake, is 10.1 parts per million, also grade six. The quality of water that was to be sent to cities was grade four instead of three.

Those were the test results even after a tidal gate was erected to let seawater flow in and out of the lake to pull out the contamination in the lake.

“The government has to accurately assess if it’s realistic to improve the water quality of the lake,” said Myeong Ho, secretary general of the Eco Horizon Institute, “and if it’s impossible, it has to redesign the entire project based on the premise that it will have to use seawater.”

According to research by the Jeonbuk Korea Federation for Environmental Movement, nine out of 10 candidates who ran in the April 13 general election in North Jeolla were skeptical of the possibility of the Saemangeum Lake’s water quality improving and agreed that the project has to be replanned to use seawater instead of trying to use freshwater from the lake.

The idea for Saemangum development project was first suggested in 1986 for food security purposes.

In 1987, President Chun Doo Hwan, after being informed that the Saemangeum development project would be unprofitable by the Economic Planning Board (EPB), postponed the project. But presidential candidates in the 1987 election, Roh Tae-woo of the Democratic Justice Party and Kim Young-sam of the Democratic Reunification Party, both pledged to push ahead with the project to win votes from the Honam region, which refers to Gwangju and the Jeolla provinces.

In response, the Ministry of Food, Agriculture, Forestry and Fisheries announced a business plan for the project.

After winning the election, Roh designated a budget of 22.3 trillion won for the Saemangeum project. But no further progress was made, and in 1991, due to disagreements with the EPB, the entire budget for the project was slashed.

Another turning point came in February 1991, when Roh, during a visit to North Jeolla, earmarked some of a supplementary budget for the Saemangeum project. Kim Dae-jung, then the leader of the New Democratic Party, made a similar request in an interparty summit. In November 1991, the Saemangeum development project officially began. 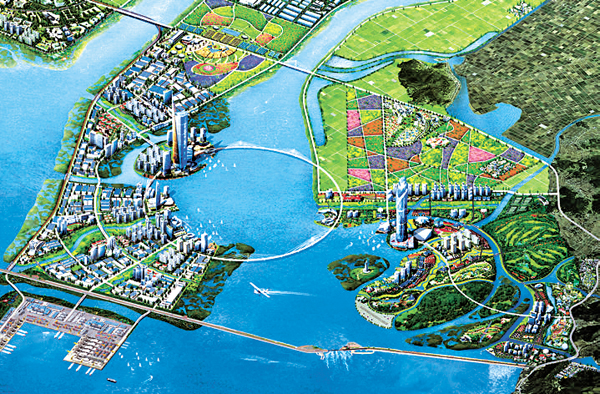 During the 1992 presidential election, Kim Dae-jung, who changed his party to the Democratic Liberal Party, and Chung Ju-yung, the founder of Hyundai, promised early completion of the project.

After winning the election in 1998, Kim Dae-jung vowed to “actively support” the project. In February 1995, during a visit to a construction site in Buan County, he said, “The government will do everything it can to support development in North Jeolla, including the Saemangeum development project.”

During the Kim Dae-jung administration, however, the project faltered after controversy arose over pollution in Sihwa Lake in Ansan, Gyeonggi. Following that, the focus shifted to contamination in Saemangeum Lake.

In 1998, Kim Dae-jung’s presidential transition team branded the Saemangeum reclamation project - along with the Gyeongbu Expressway and Siwha Lake development project - as President Kim Young-sam’s worst projects. A committee of civic organizations, professors and private research institutes told the government to end the project because it was polluting Saemangeum water and harming the ecosystem of the mudflats.

A review panel was established to examine the environmental effects of the Saemangeum reclamation project in 1998, but the result was inconclusive.

Despite all the controversy, the Saemangeum project restarted in May 2001.

The government settled environmental concerns by first developing the Dongjin River area, which suffered least from pollution, and pledged to carry out the development with techniques to improve water quality.

Roh Moo-hyun was negative about the Saemangeum project during his term as minister of maritime affairs and fisheries in the Kim Dae-jung administration. But in 2002, when he was running for president, he promised to push the project ahead.

Disagreements over the project continued. On March 28, 2003, people from civic and religious organizations participated in a pilgrimage from Buan County, North Jeolla, to Seoul for 65 days to demand the government stop the project. They went on to sue the government. In 2006, the Supreme Court, however, ruled in favor of the government, saying it was unreasonable to stop a national project due to vague worries for the environment.

The project gained momentum after that, and Saemangeum Lake was formed on April 2006.

Ten years after its construction, however, the quality of the lake’s water is still much the same.

“The Saemangeum development project is an unprecedented project that could even ruin the country,” said Kim Seok-chul, a professor at Myongji University. “I personally spent 1 billion won to write a book of reasons to be against the project.

“There are immense problems with this project, and no one’s claiming responsibility for it,” Kim said.