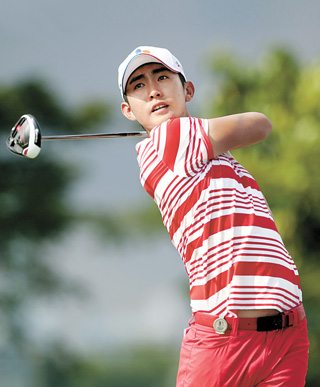 Korean golfer Lee Soo-min topped the Shenzhen International to claim his first title on the European Tour at Genzon Golf Club in Shenzhen, China on Monday.

The 22-year-old Korean, who played in the Shenzhen International on an invitation by the sponsor, was off to a good start in the first and second round of the competition, going 6-under and 7-under during the first two rounds with six and seven birdies each day. His performance on the third day, however, lacked the brilliance he showed earlier as he carded only four birdies while grabbing a double-bogey in the 5-par 17th hole. Still, Lee fought through to par the final 18th hole and maintained his position at the top of the leaderboard ending the third round.

Burdened by the pressure of being at the top, Lee struggled from early on in the fourth and the final round of the event. He started off the first hole with a bogey and added a double-bogey in the 4-par seventh hole. After the eighth hole, the round was suspended momentarily due to rain. It seemed like Lee was able to compose himself during the three-hour break as he came out to card the first birdie of the day in the tenth round, grabbing yet another birdie in the 5-par 13th round before the round was postponed until the next day because the sun had set.

Going into the fifth day of the tournament tied with Alexander Levy of France and Lee Slattery of England on the leaderboard, Lee went solid on still-wet grass and birdied the 16th hole, finally pulling an eagle on the 5-par 17th hole to come out with 1-under 71 for the final round and aggregated 16-under 272.

Joost Luiten of Netherlands and Brandon Stone of South Africa tied at second to wrap up the tournament two strokes behind Lee’s score, closing at 14-under.

With his win, Lee became the second invitee in the European Tour to top a tournament. Lee is also the second Korean golfer to win a European Tour event after An Byeong-hun, who won the BMW PGA Championship in 2015.