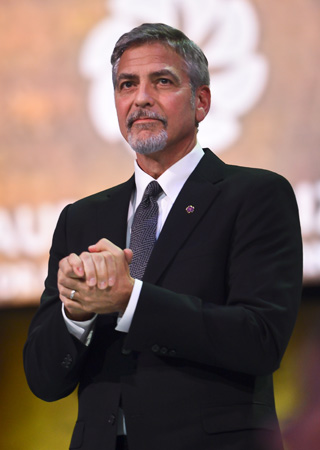 YEREVAN, Armenia - Actor George Clooney presented a $1.1 million award on the 101st anniversary of a massacre of Armenians by Ottoman Turks to a Burundi woman who offered sanctuary to thousands of orphans in the middle of a civil war there.

The killing of more than 200 Armenian intellectuals on April 24, 1915 is regarded as the start of the massacre that is widely viewed by historians as the first genocide of the 20th century in which they estimate 1.5 million Armenians were slaughtered.

Turkey, the successor to the Ottoman Empire, vehemently rejects that the deaths constitute genocide, saying the toll has been inflated and that those killed were victims of civil war and unrest.

Clooney presented the first Aurora Prize, an award recognizing an individual’s work to advance humanitarian causes, to Marguerite Barankitse, who saved thousands of lives and cared for orphans and refugees amid the Burundi civil war. Armenian philanthropists selected her for the award.

Clooney has been a prominent voice in favor of countries recognizing the killings as genocide, which the United States hasn’t done.

Before he presented the award, Clooney reminded the audience that Adolf Hitler once reportedly said: “Who remembers Armenia?” Clooney said: “The whole world.”

“By recognizing Marguerite Barankitse’s courage, commitment and sacrifice, I am hopeful that she can also inspire each one of us to think about what we can do to stand up on behalf of those whose rights are abused and are in most need of our solidarity or support,” Clooney said.

President Barack Obama declined on Friday to refer to the 1915 massacre as genocide, breaking a key campaign promise as his presidency nears an end. Obama called the massacre the first mass atrocity of the 20th century and a tragedy that mustn’t be repeated. AP