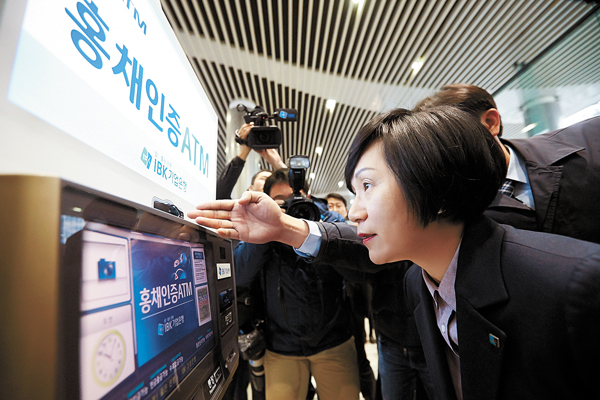 IBK CEO Kwon Seon-joo tries making a withdrawal with an iris scan at the bank’s headquarter in central Seoul. [IBK]

After running an iris verification system on two of its ATMs since December, the Industrial Bank of Korea (IBK) is planning to expand the technology across all branches within the year.

“In the initial stage, there were concerns and negative perceptions about revealing information about one’s body parts,” said Kwak Young-ki, general manger of the fintech business department at the bank in an interview with the Korea JoongAng Daily. “But after four months, we have become friendlier about using the iris-scanning system, and I think if technology continues to improve, repulsion to such biometric information will disappear in the future.”

In June, the IBK will start using the iris verification system on ATMs at 10 branches in order to test its effectiveness. It is meant to replace one-time password tokens and security cards.

“This fintech trend is expected to persist in the long run, regardless of the politics or government shift,” Kwak said. “Conventional banks need to seek new types of financial services by not competing with fintech start-ups but by embracing them.” 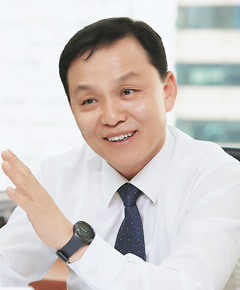 Q. What is the bank’s plan for expansion of the iris verification system?

A. In an internal survey, we found 75 percent of the bank’s employees had positive opinions about expansion of iris verification. The employees came up with three strengths of the system. First, there is no need to carry a physical tool. Second, the system prevents risks of losing or counterfeiting physical cards or other verification tools. Lastly, when users lie about or deny transactions they executed by mistake, such biometric verification is highly effective in proving they made the transactions. After the limited test, the bank plans to further expand the new system within the year.

How is the bank going to deal with the security issue presented by biometrics?

We are going to require more than one bio-verification methods. We are working with a bio-signature business, and we are thinking of designing a cross-verification system using both iris scanning and bio-signature. Plus, we could set different levels of security in accordance with transaction volumes. For example, relatively small transactions could be approved with just fingerprint verification, while those larger than a certain amount would require fingerprints and iris.

In addition, a number of banks and research institutions are working on establishing a server operated by the Korea Financial Telecommunications & Clearings Institute, which will store parts of consumers’ biometric information, while the remaining parts will be stored by banks on their own servers. This is going to cost a lot for both banks and the institution, but security shouldn’t be sacrificed.

What other areas are IBK focusing on?

We also have interest in crowdfunding. We opened a crowdfunding platform in January, which matches start-ups in need of funds with investors by offering the companies’ information. For successful matches, we provide incentives in lending and getting office space. IBK can also invest in some of the start-ups with creative ideas.

As for lending, we issued 160 billion won ($139.2 million) in loans to fintech start-ups last year. This year, our plan is to expand it to 400 billion won as the market gets bigger.

What is IBK’s plan to support fintech start-ups?

As a state-run financier for small and mid-size firms, we are going to contribute to discovering promising fintech start-ups and support them with financial incentives. The era of fintech will give traditional financial institutions opportunities whether or not they collaborate or compete with start-ups. After supporting them, we would move one step further by applying their technologies to our services.