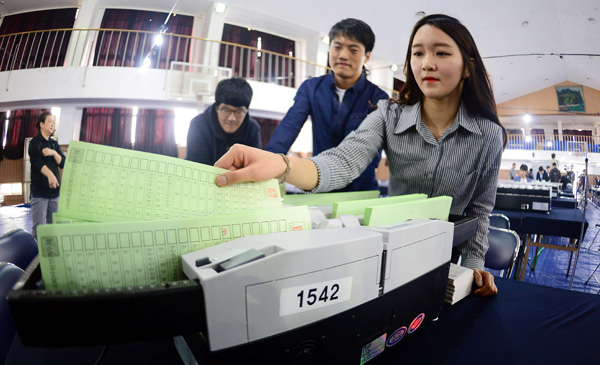 Nearly two weeks have passed since the April 13 general election, but the aftermath still lingers. It is because of the unprecedented change the election caused in the country’s political landscape. A new arena opened for three parties, reminding people of the period of the ancient Chinese three kingdoms — Wei, Shu and Wu. Expectations and concerns were expressed, but we should use this opportunity as a golden division for advanced democracy of talks, compromise and wise eclecticism, rather than confrontation, conflict and hostility.
The new political landscape was created by split voting, which means voting for one party’s candidate for an electoral district, while voting for another party for proportional representation.

It was interesting that no election expert accurately predicted split voting. What prompted the split voting at the final stage of the campaign?
First was the scandalous investment by Jin Kyung-joon, a chief prosecutor, in Nexon shares worth about 12 billion won ($10.4 million). Although a sitting prosecutor scored a suspicious astronomical profit from the investment, the Blue House, the administration and the ruling party showed surprisingly lukewarm responses. They prompted the misunderstanding that they were protecting Jin, and office workers and middle-class voters became enraged.

The massive defection of 13 North Korean restaurant workers from Ningbo, China, also affected the election at the last minute. The government broke its long-held practice and immediately announced their arrival, which took place on the eve of the election. There were suspicions that intelligence authorities manipulated the case.

Many voters condemned the government’s handling of the case for trying to use it to influence the election. Such abnormal behavior at the last minute of the campaign fueled the accumulated dissatisfaction toward the government and the ruling party, and the outcome was a crushing defeat, enough to be referred to as a de facto impeachment.

In this election, the voters also managed to break down longstanding regionalism. Kim Boo-kyum, Lee Jung-hyun, Kim Young-choon and Chung Woon-chun became election heroes who defeated regionalism without giving up. But their triumphs are still not enough to end the dark spell of regionalism. Voters must complete the revolution by ending their tradition of casting ballots for parties and politicians that feed on regionalism.


*The author is a regional news editor for the JoongAng Ilbo.