Lotte focuses on the human side of things

Lotte focuses on the human side of things 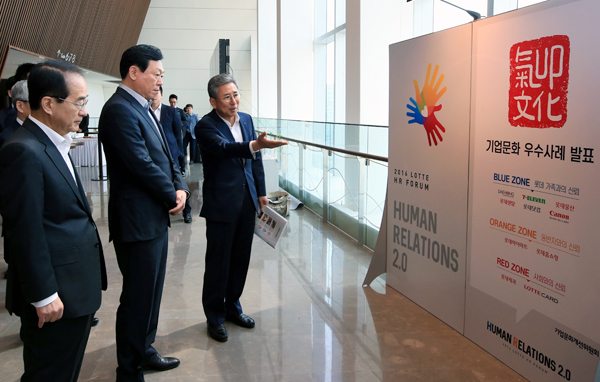 The group held an annual forum called 2016 Lotte HR Forum at the Lotte Concert Hall in Jamsil, southern Seoul, attracting over 650 employees from different divisions including human resources and education.

“To respond to our new management environment,” the chairman said, “we need to form a creative corporate culture centered on humans. We should engage with workers inside the company and other related parties through open communication.”

At the forum, Arne Gast, a partner at McKinsey & Company, delivered a lecture titled “Beyond Performance.” Also invited to the event were human resources team leaders at Alibaba and Hitachi Group, who shared their insight on personnel management and education.

The forum came as the retail group struggles to improve its battered image, especially after a fraternal conflict erupted between Shin and his older brother, Shin Dong-joo, exposing problems within the company, including poor corporate governance and the family’s dynastic hold over the company. A series of unfair business practices associated with Lotte Home Shopping and Lotte Mart further tainted the group’s brand.

Following the criticism, Lotte Group launched a committee last year devoted to enhancing corporate culture. The committee comprises 20 figures, including people from both inside and outside the company, with Vice Chairman Lee In-won at the helm. Lee Kyung-mook, a business management professor at Seoul National University, was also appointed to co-head the committee.

The group said the inclusion of an outside leader was made at Shin’s request, as the chairman expects that non-Lotte people can provide a more objective perspective. Other members come from civic organizations and other companies.

Park Song-wan, the head of Lotte Academy, an internal training center for Lotte employees, acknowledged that changing corporate culture is a challenging task.

“Forming a specific company culture is difficult,” he said, “but more challenging is changing corporate culture. We host the forum to openly discuss with our workers the formation of a corporate culture where workers can enjoy work.”

Now that the heat of the fraternal battle has retreated, the chairman has also set out to expand his business through mergers and acquisitions, along with efforts to improve the company’s image.

Lotte is expected to open a new duty-free shop after closing the previous one at Lotte World Mall in Jamsil, southern Seoul. The Korea Customs Service will announce its plan on issuing more licenses to build duty-free shops later this week.