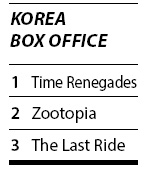 In a sluggish weekend box office, Kwak Jae-yong’s romance thriller “Time Renegades” maintained its hold on the top spot for the second week in a row. It attracted 228,088 moviegoers over the weekend, bringing its two-week total to nearly one million. It has earned 7.6 billion won ($6.6 million) so far.

Disney’s “Zootopia” again rose in the ranks, landing in second place with 143,029 tickets sold. Since it opened on Feb. 17, it has sold 4.4 million tickets, making 34.8 billion won. The family-friendly film directed by Byron Howard and Rich Moore has been doing well by slowly attracting audiences based on word-of-mouth buzz. Without many competitive new releases in Korean theaters, where early springtime is known to be an off-season, the high-spirited film has been continuously selling out showings.

Domestic B-rated comedy “The Last Ride,” starring Ryu Deok-hwan, Ahn Jae-hong and Kim Dong-young, debuted in third place with 135,176 attendees. The film is Nam Dae-joong’s directorial debut and follows a guy who is one day diagnosed with a terminal illness and is trying to achieve his one-and-only dream before he dies, which is getting a girl into bed. Two of his best friends, who are not much better off, help him along the way.

Meanwhile, two re-released films ranked within the top 10 over the weekend.

The Italian film “Life is Beautiful,” which initially opened in 1999, reopened in local theaters and sold 28,390 tickets, while the legendary 2001 Japanese romance flick “Between Calm and Passion” saw 15,925 attendees.