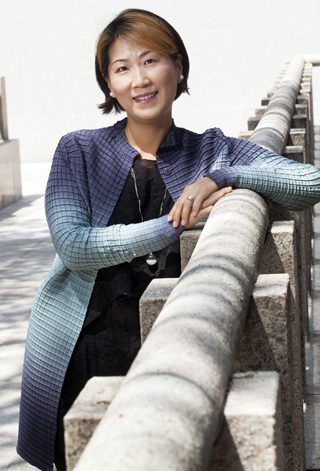 Lyric soprano Lee Yun-ah considers herself lucky to have had so many opportunities to sing on stage - the greatest joy for opera singers, according to her.

“Singers are always ready for repertoires that suit their voices,” she said during an interview this month with the Korea JoongAng Daily.

For that reason, Giacomo Puccini is a special composer for her. The Italian composer has given her many opportunities for her to express her talent on stage, in “La Boheme” as Mimi, “Madame Butterfly” as Cio Cio San and in “Turandot” as Liu, to name a few, which have considerably advanced her musical career. She toured in Europe and the United States as Cio Cio San in “Madame Butterfly,” performing a total of 157 times with various operas including the New York City Opera.

And starting on Thursday through May 1, she is returning to Korea to play the title role in “Rusalka,” a Czech opera composed by Antonin Dvorak, with the Korea National Opera. This tragic love story of water nymph and a prince and Lee’s inherent energy on stage are sure to thrill theatergoers.

Q. You are going to perform in the Korean premiere of “Rusalka.” Could you tell us about the opera and your role?

A. The main character, Rusalka, is a water nymph, which captures the audience’s attention because they inherently have the curiosity about fairies, and they might also be curious whether this special being is expressed in a different way in the opera.

“Rusalka” is based on [Friedrich de la Motte] Fouque’s novel “Undine,” which is the basis of mermaid stories that people are familiar with. Rusalka falls in love with the prince at first sight and asks the witch Jezibaba to turn her into a human but loses her voice in return. The witch said they will be cursed only if they don’t succeed in eternal love - she will become a dark spirit, while the prince will die.

However, the prince promises his love to another woman, but he soon realizes his true love of Rusalka and begs her to forgive him in the forest, asking her to kiss him although he knows he will die if she kisses him.

The performance ends with the kiss of death, but we concluded that it was not an act of revenge, which is very common for humans. In fact, Rusalka did what he wanted at the last moment of his death.

This piece suits me well as the temperature and the tone of the voice that the composer requires are similar to mine. As a singer who is open to all possibilities with my own voice, it is great luck for me to play a character that suits my voice, and this is why I joined the upcoming piece.

Opera singers go through a processes to stage a performance - for example, they study the characters they will play, practice, and finally bring what they prepared to the stage. Among them, what are the happiest moments that give you the most catharsis?

The happiest moments exist everywhere - including when I get huge applause at the curtain call, of course. But as a singer, I don’t feel satisfied when I know I didn’t do the best I could do in a performance, as singers themselves are the strictest touchstone when it comes to monitoring each performance.

On the other hand, when the moment comes where I can do something that I wanted to overcome, I feel the most happiness. These moments can also appear while I practice, when I succeed even once or twice during six to seven hours of practice each day.

Also, I feel joy as an artist when studying in-depth about the pieces I play. At times, the interpretations of the piece may differ between singers and the artistic director, and I think it is not only natural but integral to making the performance.

As a team, our interpretations should be in line with each other; otherwise, the performance becomes something that the audience cannot sympathize with. Therefore, we discuss and debate about the piece - when we find a common point where both parties can agree, I also feel happiness. 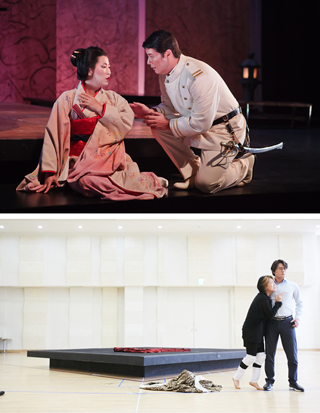 Opera singers don’t just sing, they also act during performances. How do you immerse yourself in the characters you play?

In ’70s and ’80s, acting was not that necessary - therefore, people said it was okay for opera singers to “park and bark,” which means that they sang with perfect technique, but with no emotion or story to tell with the song. But the world has totally changed. Opera has to compete with musicals, and people don’t go watch shows that are not visually attractive or believable. I think this is why we need acting.

Many people ask me whether I try to recall my personal experiences while acting on the stage. I don’t do that because it rather makes me seem unnatural, which I don’t like. Instead I try to really become the character; for example, I naturally burst into tears when I see Rodolfo as Mimi in the opera “La Boheme,” and I’m upset when I encounter Don Giovanni when I become Donna Elvira [in “Don Giovanni”]. This is how I act, but I never put my personal affairs into the performances.

Please talk about your daily life, not as a singer but a person.

Singing has always been my job and I didn’t have any hobbies. Now, I do have two hobbies, which are cooking and playing tennis. I call them my “second passions.”

I have never liked playing sports until I came across tennis five or six years ago. From then I always carry a tennis racket with me even when I go on a tour in the United States, moving from city to city. I also find a tennis club in each city I go in advance to find a partner.

Cooking is the therapy that heals me. I always want to make the cuisines I tasted before myself and find cooking programs on television, both Korean and American channels. I don’t miss even a single episode (laughs).

I think cooking is an activity that requires a lot of creativity and meticulousness. I have to prepare each ingredient on time and take care of each dish before people taste the food. All of these processes resemble those of opera preparation, as I orchestrate the ingredients.

I’d say I entertain myself both on the stage and in the kitchen and make others happy with my voice and food.

You spend most of your time outside Korea, as you travel around the world performing. Are you willing to join Korean opera productions after “Rusalka?”

Of course, I will. I always want to come to Korea because it is my home country. However, as I live in New York with my husband, I don’t have many opportunities to stay in Korea for a long time.

But I can enjoy my time in this country when I come here to perform an opera, interacting with people here for quite a long time. As I am staying in Korea now, I feel that every day is so precious.

The genre of opera is still somewhat unfamiliar to Korean audiences. Do you expect it to become popular?

I don’t expect opera to become popular, actually. People have a lot to enjoy nowadays with a surging amount of entertainment, so I can’t ask them to enjoy opera every day. Pop music, movies and other culture that surrounds us every day entertain us in our everyday lives.

Therefore, I’d like to liken opera to fine dining because I love to cook. Even though it is not easily accessible in our daily lives, people sometimes treat themselves at fine restaurants. As the culture of fine dining is recently becoming popular to Koreans with the emergence of cooking television programs where famous chefs introduce new kinds of food, people are beginning to visit the restaurants to enjoy new pleasures.

In this sense, although operas may not make people come to the theater every day, the opera industry has to let the potential audience to come to the theater even once in a while with extended repertoires and a variety of programs prepared for beginners as well. Who knows, opera mania could be born in this way.

You have achieved a lot in your musical life, but it doesn’t mean you stopped dreaming. What are your objectives for the future?

So far, I have been so lucky to have had a lot of chances to perform on stage. But after I retire, I want to teach the things I’ve learned in this industry to young students. That’s how I want to open the next chapter in my life.