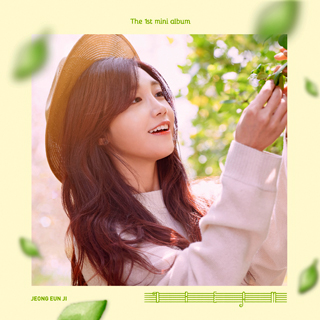 Jung Eun-ji, a member of the K-pop girl group Apink, is now unleashing her own emotions with her new album, “Dream.”

Not only did she appear on music TV shows with the group, she also made a strong impression as a potential solo artist on other programs that require strong vocal abilities, such as “Immortal Song” and recently “Duet Song Festival.”

Released five years after her debut, the new album contains six tracks in total. The tracks were put together by star producers, such as Duble Sidekick and lyricist Kim Ea-na.

The title song, “Hopefully Sky,” evokes nostalgia with lyrics that tell of love between a father and a daughter. Guitarist Harim is featured in the song and adds the gentle, acoustic sound. A piano version of the song is also included on the album to let listeners enjoy Jung’s voice to the fullest.

The second track, “Love Is Like the Wind,” is about a girl waiting for her lover to come back after she broke up with him. Her deeply emotional, yet calm voice has listeners recall their own experiences of heartbreak.