Kim has turned away from Moon

Kim has turned away from Moon 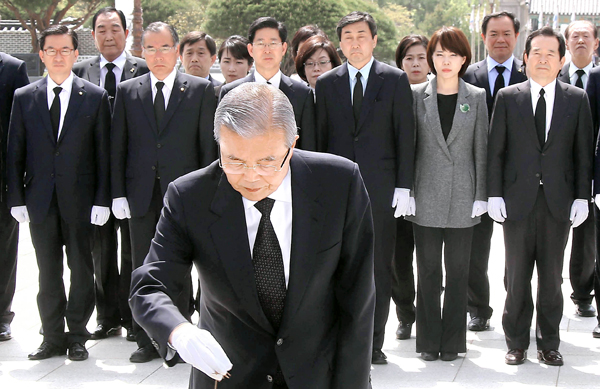 Kim Chong-in, interim leader of the main opposition Minjoo Party of Korea, offers incense at the May 18th National Cemetery in Gwangju on Monday. [OH JONG-CHAN]

The cheerful victory in the general election for the Minjoo Party has faded away as its interim chairman, Kim Chong-in, turned his back on former leader Moon Jae-in, whose aides are blaming Kim for a defeat in his southern political home turf.

Kim Chong-in, the election wizard and interim head of the Minjoo Party, said in an exclusive phone interview with the JoongAng Ilbo on Sunday, “I will not personally meet the former leader Moon anymore.”

“Moon’s aides are starting to say that I have to take responsibility for the defeat in Honam because I opposed the late President Kim Dae-jung’s Sunshine Policy,” Kim said, referring his politically liberal home turf of Jeolla regions and Gwangju. He denounced these remarks as “disgraceful.”

The Sunshine Policy is the North Korea policy spearheaded by former President Kim, who held the first inter-Korean summit with the former North Korean leader Kim Jong-il and won a Nobel Peace Prize for his efforts.

The interim leader Kim has repeatedly said that the Sunshine Policy needs revising, explaining that the current situation in North Korea is radically different from the way it was before.

His comments were seen by some liberal lawmakers as hawkish, especially those belonging to Moon’s faction, who denounced the Park Geun-hye government for temporarily shutting down the Kaesong complex project, the last vestige of the Sunshine Policy, in early February.

Kim’s farewell to Moon and his aides came after the meeting between Moon and Kim on Friday, when they discussed the current leadership. 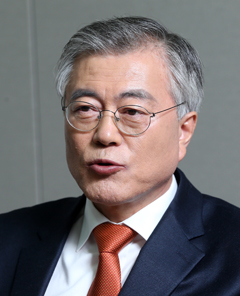 After the election victory, the Minjoo Party has faced a split over its chief campaigner Kim’s ambition to stay on as leader. Kim hinted at his intention to continue in that capacity until the presidential election, while senior members of the party strongly protested, saying the party must elect a new leader by convention.

Kim visited Gwangju on Monday for his first official visit to the region after the general election, saying that the party will work to prevent disputes among factions, vowing to come together as a party that can win the presidential election.

“I believe there is restructuring needed, not only for the economy but also for politics,” Kim said in a press conference at Gwangju Metropolitan Council.

“It is an act advantageous to the enemy, if the Minjoo becomes complacent, hindering change.” vMeanwhile, Moon supporters sent messages to reporters on Monday saying that they will not comment on any speculation over the soured relationship between Kim and Moon. Moon is reportedly to visit his hometown of Yangsan, South Gyeongsang, this week.

Earlier this month, Moon said he would not intervene in the party’s future leadership, but his opinion is expected to play a crucial role, as he is the presidential frontrunner with the largest number of supporters in the party.

Moon Jae-in visited Gwangju a few days before the general election and said he would not run for the presidency if he could not secure support from the Honam region.