Team Korea is aiming big in the upcoming summer games, targeting 10 golds and a place in the top 10 ranking for the fourth consecutive Olympics.

Today marks 100 days before the opening of the global sports extravaganza which is set to take off on its month-long journey on August 5. As the first summer games in South America, all eyes are on Brazil. With the event quickly approaching, Korean Olympians are going into the final stage of preparations at the Taeneung Training Center, hoping to bring glory to their home country and their families.

Korea has ranked in the top 10 at almost every summer Olympics for the past 28 years. The only Olympics where Korea placed out of the top 10 since the 1988 Seoul Olympics was at the Sydney Olympics in 2000 when Korea finished 12th with eight golds, 10 silvers and 10 bronze.

In the previous two Olympics in Beijing and London, Korea won 13 golds each, finishing seventh and fifth in each of the summer games. One of the drivers behind Korea’s success is the country’s “gold mine” events such as archery, judo and shooting.

Out of 243 medals that Korea has earned in its history, 81 are gold medals. Among them, 19 came from archery. Collecting its first gold in archery at the 1984 Los Angeles Olympics, Korea has since accumulated 18 more, averaging 2.38 golds per Olympics from the event.

During the last Olympics in London, Korean archers stood atop of the podium in three occasions including the women’s team event and individual events for men and women. After grabbing early golds in archery, Korea’s spirits for the summer games were lifted as its athletes finished with the best record in the country’s history at fifth overall. Undoubtedly, expectations are high once again this year for the archery team at Rio. 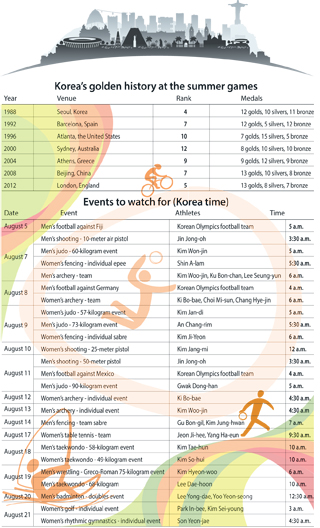 After the arduous process of national team selections, six archers - three men and three women - made the Olympics national team on April 19. The athletes who secured their tickets to Rio are Ku Bon-chan, Kim Woo-jin and Lee Seung-yun for the men’s team and Ki Bo-bae, Choi Mi-sun and Chang Hye-jin for the women’s team.

Ki Bo-bae, who brought home two golds from London in individual and team events, is the ace of the team, while Kim Woo-jin and Chang Hye-jin, both of whom were disqualified from the Olympics trials after failing to place within the top three prior to the London summer games, are also expected excel after missing the last Olympics, by aiming for gold.

Another golden goose for Korea in the Olympics is judo. Since now retired judoka Ahn Byeong-keun started off the gold rush in 1984, the Korean team has clinched a total of 11 gold medals up to the London Olympics, and things are looking good for Rio. As of April, there are four Korean male judokas ranked No.1 in the world, including Kim Won-jin in the 60-kilogram event, An Baul in the 66-kilogram event, An Chang-rim in the 73-kilogram event and Gwak Dong-han in the 90-kilogram event. Essentially, the Korean team has a shot at every weight division. In the women’s event, Kim Jan-di in the 57-kilogram division will be the frontrunner for Korea in its chase for a gold.

Shooting also has rising potential for Korea. Jin Jong-oh got gold in the 50-meter pistol at 2008 Beijing Olympics and once again in 2012 London Olympics and is aiming to become the first shooter in the world to take golds in three consecutive summer games. He is currently ranked fourth in the world in the 50-meter pistol according to the International Shooting Sport Federation.

Jin is not the only Korean contender shooting for gold in Rio. Kim Jang-mi in the women’s 25-meter pistol, is taking aim at her second Olympics gold after 2012 in London.

Olympic prospects are also looking good for rhythmic gymnast Son Yeon-jae, who finished fifth in London after dropping her clubs, knocking her from third position. Determined to hone her performance, Son has undergone intensive physical training during the offseason. Her performance thrived, as she set her personal best in the individual all-around at the Rhythmic Gymnastics World Cup 2016 in Pesaro, Italy by tallying 73.900 points.

“I feel like I have the stamina to concentrate better in my performance this year,” said Son. “The increased level of concentration automatically leads to better execution of my choreography.”

Through training, Son raised her confidence and ultimately this contributed to an improvement in her record. “It is somewhat burdensome to expect to do better than in London Olympics,” added Son. “But I am glad to have this kind of pressure as it motivates me to push forward.”

Earning the first Olympics medal in London after getting a bronze, men’s football is targeting yet another medal in Rio. Wildcard Son Heung-min of the Tottenham Hotspur is expected to lead the squad. Korea was assigned to Group C with Mexico, Germany and Fiji in the preliminary stage.

“We will take on each game as if it was the final match,” said Shin Tae-yong, the Olympics football squad manager. “We will not let our guard down.”