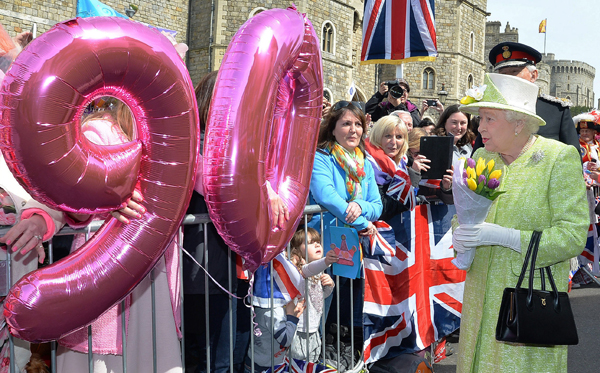 Queen Elizabeth celebrated her 90th birthday this week. She is the longest-living and longest-reigning monarch of the United Kingdom. She is also the Queen of Canada, Australia, New Zealand and Head of the Commonwealth comprising 53 sovereign states. While Great Britain is no longer the empire on which the sun never sets, Queen Elizabeth still holds an important and grandiose status. She ascended to the throne in 1953 and has reigned for over 60 years, witnessing the formation of the modern world. It is no exaggeration that she is living history.

You may wonder how a democratic country could have a monarch in modern times. The king reigns but does not govern, they say. But in the United Kingdom, the royal family is a useful tool for national integration, and while the social structure and mind-set are rapidly changing, the British royal family’s status is maintained largely thanks to the stern yet clever queen.

The queen has set her role as the guardian of tradition and protector of the people, and has carefully and constantly projected that image. While she does not intervene in real politics, she is a trustworthy guideline. She stands in juxtaposition to elected politicians who frequently change and seem to pursue a private agenda. During World War II, the royal family did not evacuate and remained in England. The queen was a 20-year-old princess at the time and joined the Women’s Auxiliary Territorial Service and trained as a mechanic.
Repeated reprisals of these episodes provide the queen strong moral and political legitimacy as the pivot of the nation and the symbol of noblesse oblige.

Her way of responding to and communicating with the public is noteworthy. When Princess Diana was killed in a car crash, she did a live television broadcast. While lavish lifestyles and scandals were controversial issues for the royal family, support for the queen herself had always been high. But she was criticized as she did not return to London from holiday, did not have the flag at half-mast at Buckingham Palace and had Diana’s two sons go to church on the day of the tragedy as if the royal family was not affected by the death. The public was outraged as she did not seem to understand the shock and mourning of the British people. When the queen learned of the public hostility, she made a live appearance on television the day before Diana’s funeral and expressed her feelings. Her personal gesture made public hostility subside.

While 80 percent of the British people support monarchy, it is doubtful the public will remain favorable after her death. Prince Charles is not popular due to his scandalous relationship with Camilla, and the discontent over supporting the royal family with taxpayer money is widespread. Opponents point out the inequality and inconsistency with democracy of hereditary monarchy. Scottish nationalists don’t recognize the Queen of England as their monarch. The public could suddenly change and seek abolition of the monarchy depending on the future conduct of the next king and the royal house. In Britain, the monarch is an object of affection, not the ruler. So the royal house cares about how it is perceived and is making efforts to communicate with the people in various channels.

In the past several years, the Korean administration severed communication and reigned over the people. It kept a distance from the national mourning over the Sewol ferry tragedy. When the hereditary monarch of England, who was born as a princess and doesn’t have to worry about elections, is working so hard to communicate with the people and seek support, it is strange and absurd that the elected officials of Korea neglect the people instead of valuing public opinion and trust except for in times of elections. They may think that their term is limited, or they may think they will only make efforts during the campaign period. Perhaps, they think the people forget easily.

A new National Assembly will be formed as a result of the recent general election. The new assembly must respond to the public and communicate sincerely. Koreans are praying for something that is only fair and natural.
Translation by the Korea JoongAng Daily staff.


*The author is a lawyer at GRM Law London.