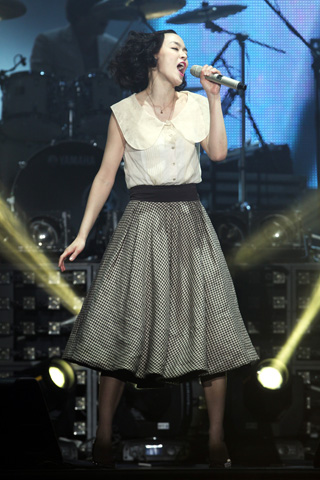 The lead singer of Jaurim, Kim Yun-a, is resuming her solo career with a new song, “Kyrie,” to be released on Friday.

Reportedly, Kim was involved in every aspect of the song’s preparation, from writing and composing to editing and even programming.

The title of the song, “Kyrie,” means a short liturgical prayer that begins with or consists of the phrase, “Lord, have mercy.” As the title suggests, the song describes a heart that is irreversibly damaged.

“The new song ‘Kyrie’ features the singer’s unique musical tune,” the agency said. “We expect the song will satisfy fans who have long been awaiting her return.”

The rock singer is slated to release two albums later this year, one in the summer and the other in the fall.

While being the lead singer of a band with many hits and one of only a few bands in Korea with a female lead singer, Kim so far has released three regular solo albums, starting in 2001 with “Shadow of Your Smile.”