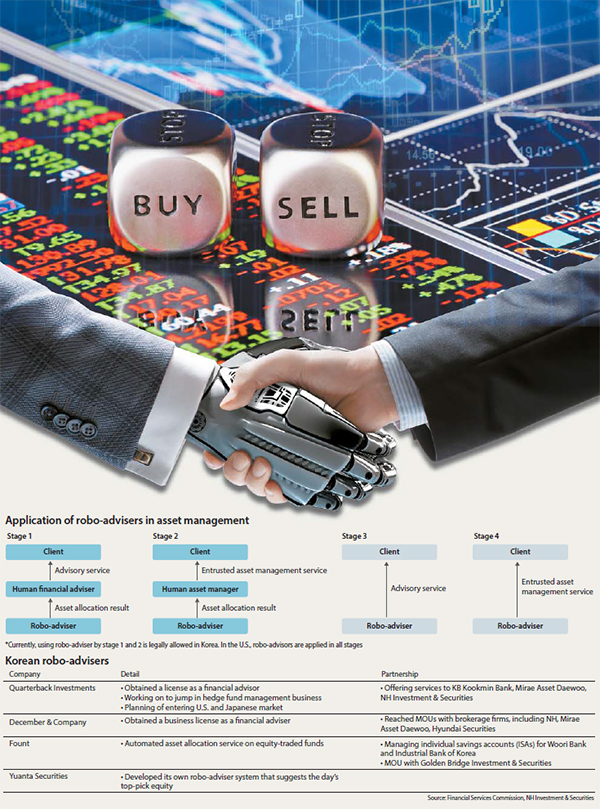 During the first three months of operation in local and overseas exchange-traded funds (ETFs), Quarterback’s algorithm had an average 2.1 percent return, which translates into an almost 8-percent annual return, according to the local fund evaluation firm Zeroin.

This is higher than the returns of many conventional ETFs during the same period. Local equity funds lost an average 0.62 percent and overseas equity funds also lost 10.1 percent since the first trading day of January through March 15.

“Many of our customers are high-profile individual investors who are now pinning hopes of getting better returns in the second half of this year by entrusting parts of their assets to the robo-advisers or getting investment advice, after suffering losses earlier this year from abrupt fluctuations of domestic and Chinese stock markets,” said Jang Bo-yoon, a marketing manager at the company. “Smaller asset owners also entrusted money in our robo-adviser trying for better yields via the quick analysis and precise allocation strategies the algorithm spits out.”

The hottest topic in the Korean financial investment industry this year is automated asset allocation services, usually called “robo-advisers,” a concept that most individual investors didn’t even know about last year.

Robo-advisers have suddenly gained investors’ attention this year, often being referred to as the “AlphaGos of finance” after the historic Go match between the world Go champion Lee Se-dol and the Google’s AlphaGo algorithm in March and the government’s emphasis on fintech.

Since January, four robo-adviser algorithm developers have started rolling out entrusted investment and financial advisory wrap accounts along with traditional financiers, according to a report by NH Investment & Securities.

In these new financial products, the algorithm is the central player instead of human asset managers. No such products, in which robo-advisers were the main allocator, existed last year.

Quarterback inked the most partnerships with traditional financiers, thanks to a mid-risk, mid-return focus that aims for annual returns of 4 to 7 percent, which caters to many Koreans’ needs to save money for retirement in an era of near-bottom interest rates.

December & Company, which was founded by NCSoft CEO Kim Taek-jin, aims for more active allocation. These financial IT start-ups obtain business licenses as financial advisory services like traditional investment trust firms in order to be seen as legitimate financiers.

Robo-adviser is a compound of robot and advisor, referring to an algorithm-based automated asset management system. The systems can be used by either individuals looking for financial advice or by asset management firms that actually make investment decisions with the customers’ money.

This is more advanced than how human analysts used computer algorithms in quantitative trading strategies, which have been restricted to particular aspects of the market and are limited to suggesting a few top-pick stocks or financial products.

Now, robo-adviser algorithms have emerged as a new solution for this year to adjust to quickly changing markets, as they can process big data across all types of funds that include a vast variety of assets, ranging from equities and bonds to raw materials.

Korea’s major brokerages have launched wrap account asset management products, and banks have launched trust accounts that are managed based on allocation models suggested by robo-advisers in conjunction with financial IT start-ups like Quarterback and December & Company.


As the minimum investment volume is fixed at near 5 million won in many robo-adviser products, smaller asset holders who begin with 10 million to 20 million won are the majority of customers. Rich customers who want to try out the new system signed up with 100 million to 200 million won, according to Mirae Asset Daewoo.

“With the robo-advisers, financiers will be able to profit from having more customers and lower costs despite cheap fees,” said Oh In-dae, head of future finance team at Mirae Asset Daewoo.

Banks this month launched entrusted individual savings accounts (ISAs) with the robo-adviser algorithms’ auto asset allocation functions, as part of their efforts to offer competent returns since they don’t have as many asset allocation specialists as brokerage firms. The Industrial Bank of Korea started using an algorithm developed by another start-up Fount, and KEB Hana Bank rolled out its own algorithm last month.

Some six banks and 10 brokerage houses in Korea are known to have rolled out wealth management products involving robo-advisers earlier this month, to follow successful cases in advanced economies such as the U.S. and Europe. So far, industry insiders estimate that about 20 billion won has flocked to asset management and advisory products offered by robo-advisers.

Many industry insiders have a rosy outlook that automated financial advisory services will succeed in Korea, as the demand for asset accumulation has recently risen and robo-advisers can offer more low- to mid-income breadwinners wider access to asset management and private banking services, which so far have been considered exclusively available to the ultra-wealthy.

“Robo-advisers were designed to mostly involve asset allocation and to pursue mid-risk and mid-return,” Oh In-dae, head of future finance department from Mirae Asset Daewoo, said. “But in the era of near-bottom interest rates, I’m sure the robo-advisers are better investment options for people looking for alternatives to bank savings.”

Given their success in advanced economies and rising demand for higher returns, Korean financial regulators eased regulations on robo-advisers starting in the latter half of this year.

The Financial Services Commission (FSC) last month it will hold a test in July for all developers of robo-adviser systems to determine whether or not they are stable enough to operate without direct human control.