‘N’ brand in high gear after success at off-road rally

‘N’ brand in high gear after success at off-road rally 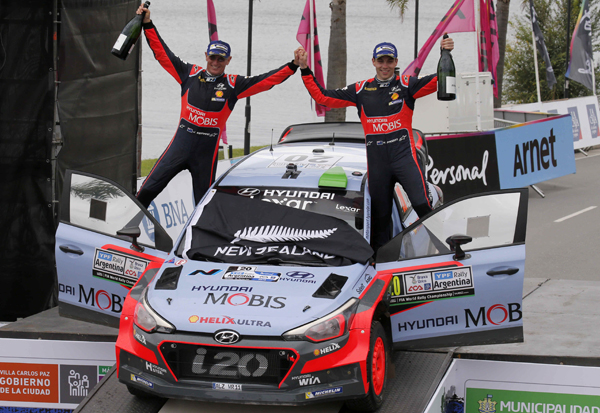 Hayden Paddon, right, and John Kennard, the assistant driver, celebrate after winning the individual and team trophy at the World Rally Championship in Argentina. The rally took place from April 21 to 24. [HYUNDAI MOTOR]

Hyundai Motor is a step closer to winning the individual and team competition at the World Rally Championship, a grueling off-circuit global motorsport competition, thanks to the technology it gained to develop “N” brand cars.

N brand cars are a series of high-performance cars that Hyundai is getting ready to roll out based on technologies gathered through experiences in the championships.

At the fourth rally that took place in Argentina from last Thursday through Sunday, the automaker won in both the individual and team category. The individual win was the first this season, led by Hayden Paddon, who raced in Hyundai’s world rally car i20 No. 3.

Since the drivers compete in events in 13 countries on surfaces ranging from snow-packed forest tracks to rock-strewn mountain passes, the race is extremely hazardous. The final winner is based on accumulated scores of a total of 13 rallies. Due to a winning streak in the fourth rally, Hyundai recorded 81 points to come second, closely chasing the German Volkswagen team in first place with 117 points.

The key to Hyundai’s performance lies in the “new i20 rally car,” which the automaker introduced at the competition. With two years of experience in the championship, world-class motor sports engineers and Hyundai’s engineers at its Namyang Research & Development Center created the new model.

Considering it is only Hyundai’s third year in the contest, while competitors including Volkswagen, Citroen and Ford have been taking part since 1973, the success of the team has raised expectations for the future.

With this year’s competition as a test bed, Hyundai Motor sees further progress in making its N branded cars.

“The first N brand car may be introduced next year,” said a company spokesman.

Hyundai Motor, the nation’s biggest automaker, has sold 1,107,377 cars, a 6.4 percent year-on-year decline in the first quarter this year in the global markets. While the carmaker’s domestic sales increased by 3.7 percent thanks to a new release of cars and a slashed tax on car purchases, export sales were sluggish with a 7.9 percent decrease from last year due to slumping demand from emerging markets.

“Since sales of the new Avante begin in the United States and China from the second quarter, we are looking forward to increased sales and operations at our factories,” Hyundai said in a statement. “With the exchange rate also turning favorable for our exports, we will do our best to improve our performance for the next quarter.”