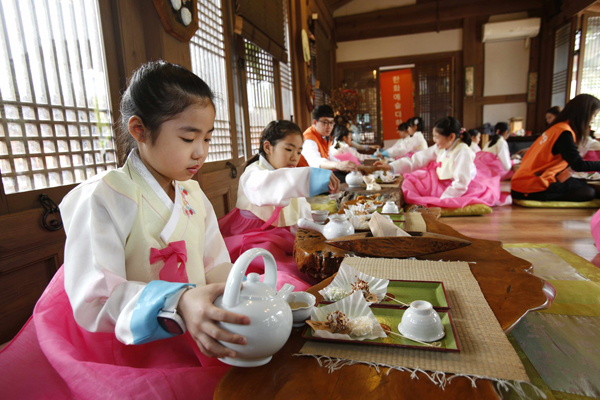 Elementary school students gathered at Gukakdang in Namsangol Hanok Village on April 21 to learn how to play the gayageum (Korean harp) and experience traditional tea ceremonies.

Laughter and joy filled the room as the children shared stories with the volunteers seated beside them.

The children are participants in “Hanwha Art Plus,” a project that provides gayageum lessons every Thursday, totaling 30 lessons by the end of the year. The program aims to capture the interest of young students early on by holding sessions in traditional Korean houses while wearing hanbok, or traditional Korean clothing.

Hanwha Art Plus is a social contribution project that Hanwha Group and the Korea Mecenat Association began seven years ago. Since then, it has provided children under the care of 150 welfare agencies nationwide the opportunity to experience Korea’s traditions through education in culture and the arts.

The project’s contributions to fostering the nation’s future talent, high employee participation rate and support for local artists were recognized in 2011 when it received the grand prize at the Mecenat Conference and Awards.

The project also received the Happiness Sharing Award from the Ministry of Health and Welfare in 2014.

As part of Hanwha Art Plus, around 400 children currently being cared for by 20 of the group’s partner organizations nationwide receive lessons in traditional Korean instruments, opera, dance, calligraphy and painting. Around 2,000 of its employees also participate as volunteers.

Since 2009, the Korea Mecenat Association has verified the effectiveness of Hanwha Art Plus by surveying children, employee volunteers, welfare agencies and instructors involved in the project. Through the survey, the participants can report their level of satisfaction with the program, as well as their achievements through it.

The results indicated that the project built character and emotional intelligence in its child participants. It also enhanced their awareness of the traditional arts and community spirit.

Employee volunteers generally showed a high degree of satisfaction with the programs (an average of 5.75 out of 7), and their interest in traditional culture and the arts was positively correlated with the number of times they participated. Furthermore, survey results showed that employees with more positive volunteer experiences were more likely to take pride in their organization.

Visiting Art Class, which tours 70 of the nation’s most culturally deprived regions, was also shown to raise awareness of the beauty of Korean tradition among the public.

Applications can be submitted from various institutions across the country, including child welfare institutions, information industry high schools and multicultural family support centers.

For more information, visit the Hanwha Art Plus website at www.artplus.or.kr.