‘Tomorrow’s leaders will educate us all’

‘Tomorrow’s leaders will educate us all’ 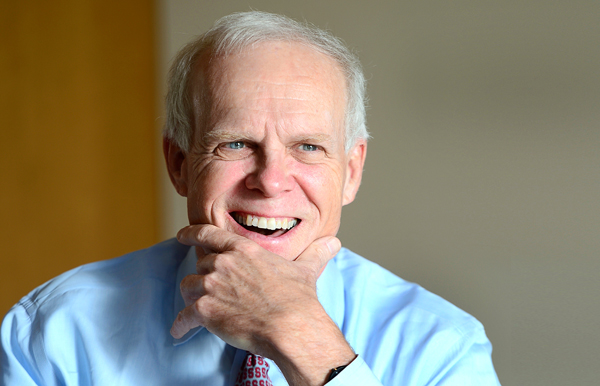 Silicon Valley has served as an important role model for the Korean economy, which puts emphasis on innovation and entrepreneurship.
An American pioneer in computer architecture, John L. Hennessy, the outgoing president of Stanford University, once said, “There would be no Silicon Valley without Stanford.”

Hennessy, who will be going back to teaching and running a graduate scholarship program, the Knight-Hennessy Scholars, sat down for an interview with the JoongAng Ilbo during a visit to Korea last month.

Q. What is the relationship between Silicon Valley and Stanford?

A. They’re so intertwined. They kind of grew up together. There was no Silicon Valley when Stanford arrived. In fact, when Hewlett Packard had their initial public offering, which was the first IPO in the valley, it was still the case that the No. 1 product of Silicon Valley was fruit. I still remember where Google headquarters is today. It was a small family farm run by an Asian-American family that immigrated to the United States. And today, there is no farm left.

You have been called the “Godfather of Silicon Valley” by venture capitalist Marc Andreessen.
That was very generous of Marc Andreessen. I think it’s an exaggeration — I think I’ve been privileged not only to be doing some of my own start-up activities but to help coach some young entrepreneurs.

What is the origin of the school’s unofficial motto, “Die Luft der Freiheit weht,” which translates as “the wind of freedom blows.”

It dates back to David Starr Jordan, the first president. It actually comes from a German scholar [Ulrich von Hutten] whose original version was in Latin. During the Enlightenment period, von Hutten stood up for intellectual freedom and people being able to do different kinds of research and write different kinds of things; he was a champion for that idea.

Stanford is a globally leading university. Do you think its success can be attributed to money?

It’s not just money. Harvard has a lot more money than Stanford, for example. It’s partly due to the fact that we were founded more recently. We are a younger university. We were founded on a different model than Harvard or Yale or Princeton, which were founded on a more traditional, European notion. We had women from the beginning; we were coeducation from the beginning. And we had a fair amount of diversity, international students. We’ve had Asian students since the doors were open. And finally, it’s the place where entrepreneurial thinking, where being bold, where trying new things, where being pioneering is part of the DNA of the institution, and I think that’s very different than virtually any other university.

How does Stanford compete with other schools to attract the best faculty?

Among the really top universities, the number of really excellent faculty — absolutely world-class faculty — is not that big a number. So there’s a lot of competition for those people. It’s not just the people that win Nobel prizes; it’s the people who are setting the agenda in lots of different disciplines and really driving them forward in economics, in the business school, in engineering, as well as, of course, in the sciences.

There’s a lot of competition for the top faculty. Basically, somebody who’s at the top level, let’s say the top 50 to 100 in the discipline, they can go anywhere they want in the world. Because they’re well-enough-known, they have a reputation, and what’s happened in the last 20 years is that now there’s a world market for those people because they are so well-known.

What is more difficult: being a scholar or an administrator?

Being an administrator is much more difficult (laughs). Being a scholar is hard, but you’re doing what you really love, and you’re doing it directly. You constantly have positive feedback. You work with students in class, and you see them grasp a new idea. Or you work on a new research idea, and you make a research breakthrough.

Being a university leader, it’s a service role. You’re serving your colleagues and your students. So you have to be somebody who enjoys enabling other people’s success.

What are the qualities of an ideal university president?

When you became president in 2000, you emphasized growth in the arts and humanities.

We had two goals in mind. One was to strengthen our humanities departments, and that basically is about faculty recruiting. But the other was trying to make the arts a bigger part of the experience of our students, and trying to think of the arts as something that are a valuable part of the Stanford education. That was our goal, and I think we were able to accomplish it.

In Korea, students of humanities and social sciences have a hard time finding jobs. How do you handle that problem at Stanford?

They don’t have a severe difficulty. It’s true that if you are a computer science major, you’re probably going to have lots of job offers, and if you are a philosophy major, you may just have a few. But our students tend to do pretty well. Many students in social sciences and the humanities go on to graduate school, and they plan that from the beginning, and they go to business school maybe, medical school or law school.

Do you want to impart any last words as you come to the end of serving as president of Stanford?

Universities really serve the future. They serve the next generation, not just by educating students, but through the work those people will do. As I got to the end of my presidency, I wanted to do one more great thing before I left, and that’s when we came up with the idea of what became the Knight-Hennessy Scholars. Because we believed that there was a shortage of great leadership around the world, in every sector. So we came up with the idea of a scholarship for people with potential from around the world, because if we get great students from all over the world, they’ll inform one another, but we’ll also have leaders we are educating for the entire world.