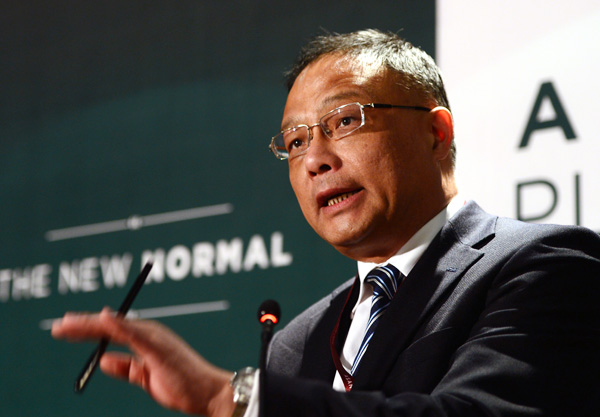 Zhu Feng, executive director of the China Center for Collaborative Studies of the South China Sea and professor of international relations at Nanjing University, speaks at the Grand Hyatt Hotel in central Seoul at the Asan Plenum 2016. [NEWSIS]

Chinese security expert Zhu Feng said in a forum in Seoul on Tuesday that it would be the “worst” possible choice if South Korea develops its own nuclear weapons to counter North Korea’s nuclear threat.

“Beijing will not allow North Korea to use nuclear weapons to blackmail the South,” said Zhu, an international relations professor at Nanjing University, speaking to reporters on the sidelines of the Asan Plenum 2016 at the Grand Hyatt Hotel in central Seoul, where global analysts discussed departures from the norm in security, economic and political affairs.

“We are geographically very close, and if there is a nuclear bomb, China will be profoundly victimized.” He further pointed out that there are some 300,000 Chinese living and working in South Korea and their safety and security should be a priority for the region.

“A nuclear weapon would be a formidable defensive countermeasure if you are facing formidable strength,” said Zhu. “Is North Korea really a formidable threat to the South? No, I never believed that. In terms of conventional capability, North Korea is far behind you.”

He asserted that one of the motives behind Pyongyang’s nuclear aspirations is to balance its increasingly weakened conventional capability. “So the reason that the DPRK [Democratic People’s Republic of Korea] desires nuclear technology is mostly psychological, some sort of emotional countermeasure to counteract its growing weakness when set alongside the South.”

He pointed out that some Chinese would argue that if Beijing wanted to bring about the collapse of the U.S.-South Korea alliance, it would do well to encourage Seoul to go nuclear. “This serves China’s interests in making South Korea more independent.”

However, he continued, “my view is that this is total nonsense because a nuclear-armed Korea threatens peace and stability on the Korean Peninsula. If South Korea should go nuclear, then Japan would go nuclear. Then South Korea will be equally squeezed by two nuclear powers, China and Japan.”

In an earlier keynote speech at the plenum, Hamre, a former U.S. deputy secretary of defense, also discussed U.S. elections and their effect on security affairs. “I find it very disturbing to hear a leading Republican candidate for president talk so disparagingly about allies and international obligations,” he said, referencing Republican frontrunner Donald Trump’s controversial remarks indicating that he would renegotiate treaties with Korea and Japan should he become U.S. president. “Alliances are not simple contracts. Alliances are obligations that we enter into with conviction and national consensus.”

He described the first half of the 20th century as “arguably worst time in human history.” In contrast, he said, the second half “was fully remarkable,” boasting as it did a burst of progress and prosperity.

“I believe one of the primary reasons why the second half of the 20th century was so much better was because America did not retreat into isolationism after World War II, but instead took on alliance relationships and partnerships. American’s alliance with Korea is the foundation of American security.”

The two-day forum, hosted by the Seoul-based think tank Asan Institute for Foreign Policy, addressed the theme of “The New Normal.” Among the 400 participants were former government officials, leading experts and diplomats such as Kurt Campbell, CEO of The Asia Group and former U.S. assistant secretary of state for East Asian and Pacific Affairs; Nobuyasu Abe, commissioner of the Japan Atomic Energy Commission; and Chung Mong-joon, founding chairman of the Asan Institute and seven-term lawmaker.

Former foreign minister Han Sung-joo, a professor emeritus of Korea University, pointed out key divergences from the past regarding the North Korea nuclear issue.

“North Korea now exaggerates and brags about its nuclear weapons and capabilities, unlike before, when they were trying to hide and deny it,” said Han, who also serves as chairman of the International Policy Studies Institute of Korea. “Unlike before, China more actively supports harsher UN Security Council actions against Korea, and vows to implement them.”

Robert Einhorn, the former U.S. Department of State special adviser for nonproliferation and arms control, said that the U.S. is prepared to use nuclear weapons to support South Korea and Japan, if needed.

Einhorn, a senior fellow with the Brookings Institute who has negotiated with Pyongyang and Iran in the past, also said President Park Geun-hye, in her upcoming trip to Tehran, should urge Iran not to sell weapons technologies to the North.