Park rules out a coalition, refuses to reshuffle

Park rules out a coalition, refuses to reshuffle 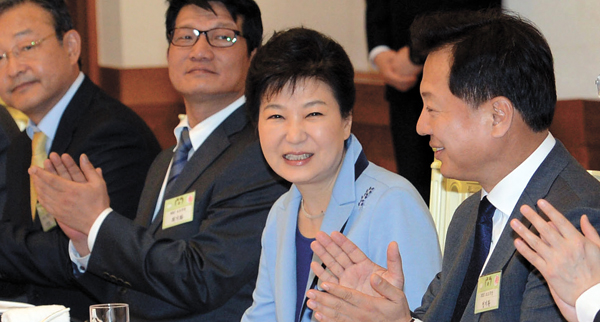 President Park Geun-hye, center, talks with chief editors of major news organizations, who were invited to a luncheon in the Blue House on Tuesday. [JOINT PRESS CORPS]

President Park Geun-hye said Tuesday that she will meet with the leaders of the three main political parties to seek better cooperation with a liberal-controlled legislature, but rejected suggestions of a coalition government or a reshuffle.

In a meeting with chief editors of the nation’s major news organizations, Park said she wants to meet with leaders of the conservative ruling Saenuri Party, the main liberal Minjoo Party of Korea and the emerging liberal People’s Party soon after she returns from a trip to Iran next week. The meeting with editors was hosted to react to the ruling party’s humiliating defeat in the April 13 general election.

The Saenuri Party won 122 seats in the 300-member National Assembly, which will start its 20th term on May 30. The main opposition Minjoo Party won 123 seats, and the People’s Party won 38 seats, ending two decades of two-party politics and bringing back a three-party system.

The Saenuri Party’s defeat was particularly shocking because it not only lost its majority in the legislature, but was reduced to being the second-largest party, promising troubles for Park’s remaining term.

In modern Korean political history, the party of the incumbent president has lost its majority before but has always been the largest party. Many, including Saenuri members, blamed the unprecedented defeat on Park’s high-handed way of running the country.

Park invited 45 editors of major news organizations to a luncheon at the Blue House on Tuesday. A question-and-answer session followed. The event started at noon and ended at 2:20 p.m.

Although Park said she will also consider meeting leaders of the three main parties on a regular basis, she rejected the idea of forming a coalition government. She said inviting politicians with conflicting visions into the administration would create chaos.

“The people made a choice in the presidential election and created a framework through the recent general election,” Park said. “We should cooperate and work harder within the given conditions and take responsibility for the outcome.”

Park said her administration and party have different policies, thoughts and values from the liberal parties, and mixing them would not be constructive.

“I believe we should meet, talk, compromise and negotiate to run the country within the framework that the voters created for us,” Park said.

She did not concede that voters brought back a three-party system because of their dissatisfaction with the ruling party. The people were fed up with the tug-of-war between the Saenuri Party and Minjoo Party that paralyzed the National Assembly, and that was why they decided to split power among the three parties, Park said.

Tuesday’s media event appeared to signal a change in Park’s way of communication. Although Park had some meetings with journalists and editorial writers in 2013, the first year of her presidency, she has preferred more controlled, one-way media events through which she can present messages to the people, such as a national address.

In her opening remarks, Park also promised to put her best efforts to better communicate with the public.

“During the remainder of my term, I will reflect the people’s will, expressed through the recent election, and take the lead in making changes and reform,” Park said. “I will put my best efforts into cooperating with various sectors and classes of society, and to better communicate with the country.”

Park also promised to put efforts into overcoming the economic crisis and protecting national security. “During the remainder of my term, I will create a new growth engine for the future and put all my efforts into improving the people’s lives,” she said.

Following the luncheon, the president answered questions from editors, on topics ranging from domestic politics and economics to North Korea.

Park said she has no intention of reshuffling her Cabinet just because of the election defeat.

“We have many economic tasks, and the security situation is urgent due to the North’s [planned] fifth nuclear test and the submarine-launched ballistic missile test,” Park said. “We have no room to accommodate reshuffles just to change the mood. I believe the current Cabinet must work harder.”

Park said she is wiling to create a consultative body for the parties and administration to address certain issues and to seek cooperation from liberal parties.

Throughout the media event, Park repeatedly stressed the urgency of Korea’s economic crisis and said she will positively consider the idea of quantitative easing.

“[Former Finance Minister] Kang Bong-kyun proposed a Korean-style quantitative easing, and it is our position to positively review the idea,” Park said. “I will make a push in this direction.”

Soon after becoming the Saenuri Party’s chief campaign manager, Kang floated the idea of a Korean-style quantitative easing. He urged the Bank of Korea to buy commercial banks’ mortgage-backed securities and quasi-government bonds issued by the state-run Korea Development Bank.

The idea, however, would require a revision of the Bank of Korea Act and the liberal parties’ support. Bank of Korea Gov. Lee Ju-yeol was unenthusiastic about the idea.

While supporting the quantitative easing policy, Park said a tax hike would be a last resort to come up with necessary resources.

Park also said she would do her best to boost domestic consumption, but the newly established anticorruption law may become an obstacle because of its strict standards. The law, which stipulates strong punishment for both bribery and gift-receiving by public servants, journalists and private school teachers, is expected to take effect in September. The Constitutional Court is currently reviewing its legitimacy following a petition filed by the Korean Bar Association.

“Whether it is constitutional or not, I am concerned,” Park said. “It started with good intentions, but it may discourage domestic spending. Once the Constitutional Court rules on it, we will follow the decision, but I believe the National Assembly can reconsider it.”

Regarding North Korea’s nuclear and missile brinkmanship, Park said she will react sternly to any additional provocations. North Korea recently fired a submarine-launched ballistic missile and some experts said the technology has made progress, Park said. She added that it is Seoul’s conclusion that Pyongyang has completed preparation for a fifth nuclear weapons test.

“We think they can do it at anytime if they want to,” Park said. “If they do so, the situation will change drastically.”

Park said the North will face harsher consequences if it carries out a fifth test. “If the North continues to ignore the international community’s warnings and stage provocations, it will only accelerate its collapse rather than protecting its security,” Park said. “The current sanctions are strong, but we can use the method of imposing waterproof sanctions to deter the North. I cannot think of any other way.”