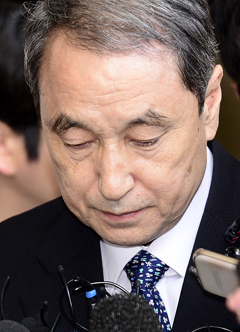 Shin Hyun-woo, former CEO of Reckitt Benckiser Korea, was summoned by prosecutors Tuesday for questioning about the company’s humidifier sterilizers, which reportedly took the lives of more than 100 people.

“Shin was summoned because he was CEO of the company when it produced humidifier sterilizers containing PHMG [polyhexamethylene guanidine] in 2001,” said Lee Cheol-hee, a prosecutor of the Seoul Central District Prosecutors’ Office.

As of 2015, 530 people were reported to the Korea Centers for Disease Control and Prevention and the Ministry of Environment as victims of fatal chemicals like PHMG in humidifier sterilizers made by the British-based Reckitt Benckiser Korea, Aekyung, Lotte Mart, Homeplus and other manufacturers. The Asian Citizen’s Center for Environment and Health, a civic group, has claimed that as many as 103 people died from using Oxy’s sterilizer, which was the most popular.

Five years ago, the government linked mysterious pulmonary illnesses and deaths from 2004 to humidifier sterilizers. People unwittingly inhaled the toxic chemicals after they mixed the sterilizer with water in their humidifiers. People who stayed home, such as infants, the elderly and pregnant women, were particularly vulnerable.

This is the first time that authorities summoned suspects involved in the making and marketing of the deadly sterilizers.

“[The CEO and the researchers] are the key members of the company who developed and sold the products,” Lee said.

It will be difficult to slap murder charges on the key suspects. “We have not found evidence that they tried to kill people by using PHMG in producing humidifier disinfectants,” Lee said, “or evidence that they sold the products knowing people could die from using them.”

But the suspects could face lesser charges of misleading customers and deceptive advertising. Oxy’s cleaning products were branded with the claim, “Harmless to humans,” since 2000. The Fair Trade Commission issued a corrective action demand and fines on Oxy’s manufacturer in 2012 because of that.

The investigation has so far discovered that Reckitt Benckiser Korea deleted from its computers a material safety data sheet submitted by SK Chemical, producer of the fatal PHMG.

SK Chemical’s data sheet contains information on safe usage and management of PHMG. It includes a clause that reads, “Do not eat, drink or inhale” PHMG because it is harmful to humans, according to prosecutors.

Additionally, after confiscating computers from Reckitt Benckiser Korea’s offices in Seoul, prosecutors said last Friday that “various” clues showed that the headquarters was trying to cover up reported side effects, and ordered employees in Korea to erase product reviews complaining of the side effects uploaded onto their website, according to the JoongAng Ilbo.

Breaking a five-year silence since the sterilizers were linked to the mysterious illnesses and deaths in 2011, Reckitt Benckiser Korea issued an apology last Thursday, saying it was “deeply sorry” for inflicting harm.

“I sincerely apologize to the victims,” Reckitt Benckiser Korea’s former CEO Shin said Tuesday. Yet when asked about the harmful effects of Oxy’s line of humidifier sterilizers, Shin answered, “I did not know about them before selling the products.”