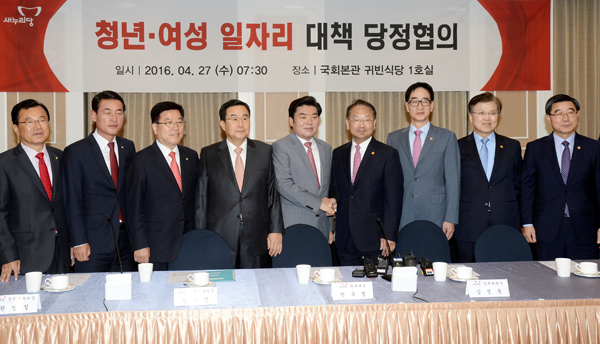 With the youth unemployment rate running over 10 percent and job opportunities at conglomerates shrinking, the government unveiled measures Wednesday to expand work possibilities for young people and women, including pregnant women.

One measure will help young people working at small and midsize companies save money.

According to the Ministry of Strategy and Finance, the government will help former interns hired at small and midsize companies build up at least 12 million won ($10,400) in two years.

“Young workers only need to deposit 125,000 won a month, or 3 million won in two years, and the government will provide them with 6 million won,” Deputy Finance Minister Lee Chan-woo said at a press conference held at the Sejong Government Complex on Tuesday.

The remaining 3 million won will be provided by the small to midsize company. That 3 million won comes from a government grant of 3.9 million won being offered to companies that put former interns on staff.

“We will start this plan in July and choose 10,000 people for this year, and will increase the number after seeing how it works,” Lee said. 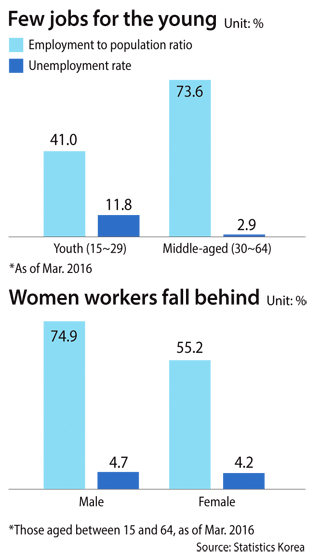 The age limit to apply for the program is 34.

In addition, the ministry decided to extend the due date on student loans for some people working at small and midsize companies, and for those in low-income households, for as long as 10 years. The strain of paying back student loans is considered one of the key factors discouraging young job seekers from applying for jobs at small and midsize companies, which have relatively smaller salaries.

Lee said the government will hold job fairs with companies in the private sector that will increase the possibility of hiring on site.

The government also introduced measures that would improve working environments for women. It will raise monthly financial support for women on maternity leave from small and medium-size companies from 200,000 won to 300,000 won.

“We will stop giving that money to large-size companies since they already have better maternity leave systems, and will use the money saved to help women working in small companies,” Lee said.

The government will also revise the labor law so that women can take maternity leave before they give birth.

Under the current law, women are only allowed to take maternity leave when they gave birth. The change will be implemented in December.

To encourage small and midsize companies to rehire women who left jobs after having a baby, the government will raise the tax credit on social insurances, including employment insurance and health insurance, from the current 50 percent to 100 percent.

The government said the plans announced this week will help create 60,000 new jobs for youth and women this year and will increase the total number of new hires for this year to 350,000 or more.

According to Statistics Korea, youth unemployment was 11.8 percent, while the rate for people aged 30 to 64, was 2.9 percent as of last month. While the employment rate for women was 55.2 percent, the same figure for men was 74.9 percent. For companies that have more than 300 employees, 11.2 female workers out of 1,000 took maternity leaves, while only 4.6 women did from companies with less than 300 full-time employees as of 2014, according to the ministry.