Assessing the danger of earthquakes in Korea

Assessing the danger of earthquakes in Korea 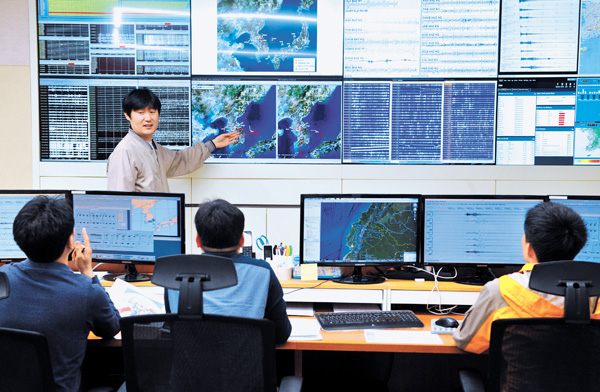 Researchers at the Korea Institute of Geoscience and Mineral Resources analyze seismic activity. Japan and Ecuador, countries bordering the notorious “Ring of Fire,” were recently struck by powerful earthquakes of magnitude 7.3 and 7.8, respectively. [KIM SUNG-TAE]

A series of strong earthquakes recently hit Japan and Ecuador, countries that border the Pacific Ocean in an area with the infamous nickname of “Ring of Fire.”

After the quakes caused significant damage and casualties, there has since been growing attention on the potential impact of seismic activity in Korea as well. The issue of the safety of nuclear facilities - six nuclear power plants are now in operation across the country while one is being built - is a particularly hot topic.

With this growing, uneasy social sentiment toward earthquakes, this article examines the status of Korea’s earthquake-resistance measures.

According to the Ministry of Public Safety and Security, out of 105,448 major domestic facilities, only 44,732 facilities, or 42.4 percent, have made necessary earthquake-resistant structures as of last October. This means that a considerable amount of property damage and casualties are expected if an earthquake strikes Korea, at a level similar to those that hit Japan and Ecuador recently.

Nuclear facilities and multipurpose dams have already updated their structures, so the percentage of earthquake-resistant structures is 98.4 percent and 100 percent for each. However, the country’s five oil pipelines are at risk of damage in the event of an earthquake.

In addition, only 22.8 percent of school facilities, of which there are a total 29,558 in the country, have earthquake-resistant structures. 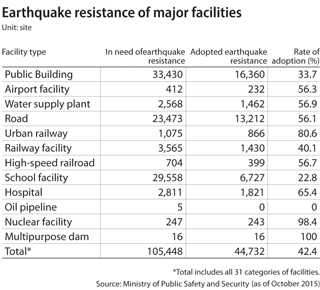 As the percentage of earthquake-resistant structures across the country remains low, the Ministry of Public Safety and Security plans to reinforce 7,294 more structures.

According to the city government and Seoul Metro, 54.2 kilometers (33.7 miles) of subway lines needed reinforcing as of late 2013, out of a total 146.8 kilometers.

Private structures are also susceptible to earthquakes. According to the Ministry of Land, Infrastructure and Transport, only 34.6 percent - a total of 1.29 million private apartments, single-family homes and buildings - were built to be earthquake-resistant.

Experts agree that Korea is no longer safe from earthquakes, unlike in the past. “Analyzing old books written in the past, we can assume that an area near Ulsan has experienced a magnitude 6.7 earthquake in 1643,” Lee Kie-hwa, an emeritus professor of geophysics at Seoul National University’s School of Earth and Environmental Sciences, said. That is smaller than the recent earthquake in Japan’s Kumamoto prefecture, which measured 7.3 in magnitude, but can still be very destructive.

However, civilians are not very active in installing earthquake-resistant systems. “People are reluctant to adopt earthquake-resistant structures, as it costs roughly 90,000 won per square meters,” said Kim Tae-won, an official at the safety authority of the Seoul Metropolitan Government.

But Kim added that “the government reduces acquisition taxes and property taxes for those who voluntarily install earthquake-resistant structures for buildings that are not required to adopt the structure by law.”

Improving earthquake detection in Korea is also necessary. According to the Korea Meteorological Administration, 43 pieces of equipment at 145 detection observatories across the country need to be replaced, as they have been used for more than nine years and are well past their effective period of use. Moreover, about three out of 10 pieces of detection equipment are not of proper condition.

According to Yoo Yong-gyu, an official at the administration, the office aims to replace all the worn-out equipment before the year 2019.

The administration installed an ocean-bottom seismometer in the sea near Ulleung Island in North Gyeongsang, which cost about $2.3 billion, but removed it last year because of the difficulty in maintaining the device.

In fact, its power cable was damaged by fishing operations in 2010, and it broke down in 2013, but it took eight months to get replacement parts for the device.

“We will provide pan-governmental level measures for improvement after examining the policies, laws and research and development next month,” the Ministry of Public Safety and Security recently said.

The announcement is slated for May 21.

Along with improving the earthquake resistance of structures, it is also necessary to improve the country’s early warning system. It is impossible for even the latest technology to predict earthquakes before they begin; therefore, an early warning system is crucial for minimizing potential destruction. Such systems can enable people to quickly evacuate from dangerous places.

The Korea Meteorological Administration currently operates a pre-warning system that announces warnings to the press and disaster prevention organs within 50 seconds for earthquakes larger than 5.0 in magnitude, after it analyzes the origin of the quake and the estimated size.

“There are currently a total of 195 earthquake observatories: 145 observatories operated by us and 50 others operated by other entities,” said Yoo Yong-gyu, who works at the administration. “We are planning to increase the total number to 314.”

“It is hard to expect a huge prevention impact with a pre-warning system in cases of earthquakes that directly hit cities, like the great Kobe earthquake [of 1995],” said Seon Chang-guk, a researcher at the Korea Institute of Geoscience and Mineral Resources. “Diverse efforts should go hand in hand, such as the reinforcement of earthquake-resistant structures and a comprehensive response system.”

Researchers at the Korea Institute of Geoscience and Mineral Resources analyze seismic activity. Japan and Ecuador, countries bordering the notorious “Ring of Fire,” were recently struck by powerful earthquakes of magnitude 7.3 and 7.8, respectively. [KIM SUNG-TAE]