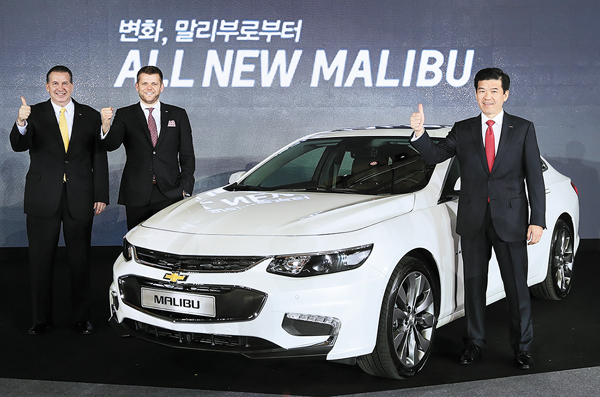 General Motors Korea has released its all-new Malibu, a long-time best-selling sedan under its Chevrolet brand.

The model has been a steady seller in the global market with more than 10 million units sold.

Lighter and longer than earlier iterations, the latest Malibu comes with a 1.5-liter (0.4-gallon) or 2.0-liter turbo engine. The 1.5-liter model offers a fuel economy of 13 kilometers per liter (31 miles per gallon) with a maximum 166 horsepower and 25.5 kilogram-meters (184.4 pound-feet) of torque.

The sticker price ranges from 23.1 million won ($20,100) to 31.8 million won. The individual consumption tax cut on cars, which will be in effect until June, is reflected in the price.

A hybrid version of the car is planned for release by this summer, GM Korea CEO James Kim said.