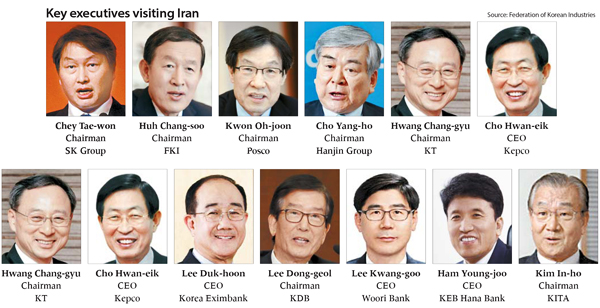 An economic mission consisting of representatives from 236 of the nation’s businesses are heading to Iran with President Park Geun-hye next month now that the sanctions against Iran have been lifted.

According to the Federation of Korean Industries, executives of the nation’s leading businesses in steel, construction, oil, IT, finance and medicine will visit Iran with officials from government agencies and business lobbying groups from May 1 to May 3. This will be the largest presidential economic mission in history. A presidential mission to the United States last October, consisting of 166 business representatives, was previously the largest.

“Since the president is visiting Iran, we expect significant progress in many businesses,” said Hong Joon-pyo, a researcher at the Hyundai Research Institute. “Considering that Korea and Iran were economically important to each other before the sanctions, this would be an opportunity to rebuild the two countries’ partnership.”

One of the biggest reasons for the scale of the mission is Iran’s plan to launch a series of infrastructure development projects. Iran is the fourth-highest ranking country in terms of proven oil reserves, with 157.8 billion barrels as of last year, and is also the top-ranking country in terms of gas reserves, with 120.1 billion Tcf (trillion cubic feet), but the country’s basic industrial infrastructure is aged. Iran is therefore currently planning a number of construction projects, totaling $243.6 billion. The Ministry of Land, Infrastructure and Transport estimates that Iran’s construction market will be about $49.6 billion this year, a 7.6 percent rise from a year ago.

The ministry added that it expects Iranian investments to snowball. For instance, after Iran’s Roads Development Organization held a summit last October to announce plans to initiate $25 billion worth of civil engineering projects, the country also revealed a $185 billion energy plan at the Tehran Summit last November.

Iran was Korea’s sixth-largest construction market until 2010, when Seoul agreed to apply sanctions against Iran. But with their removal, things could return to pre-2010 levels, if not better. The projected rise in Iran’s crude oil exports, for example, will trigger greater demand for oil carriers and storage facilities, as well. According to industry data, about $80.7 billion worth of projects are anticipated in those sectors this year. Considering that the nation’s top three shipbuilders - Hyundai Heavy Industries, Daewoo Shipbuilding and Marine Engineering and Samsung Heavy Industries - only won $26.1 billion worth of overseas projects last year, the Iranian market is likely to occupy much of their attention for the near future.

The nation’s No. 3 conglomerate, SK Group, will send its chairman, Chey Tae-won, as well as executives from its oil refiners SK Innovation, SK Networks and SK Energy. These oil refiners previously imported about 10 to 15 percent of its crude oil from Iran before 2009, but the figure dropped to 5 percent in the past few years. “The company is expected to import more Iranian oil and improve the company’s profit structure by about 120 billion won [$104.3 million] to 180 billion won per year,” said a researcher at Kyobo Securities.

Posco’s chairman, Kwon Oh-joon, is visiting Iran to discuss building an integrated steel mill there. The company singed a memorandum of agreement (MOA) about the project in February.

“I’m pleased that President Park is visiting Iran and I believe her visit will strengthen the two countries’ relations,” said Hassan Teherian, the Iranian ambassador to Korea. “Since Iran is promoting cooperation with global companies in building power plants, traffic infrastructure, airports and harbors, it would be an opportunity for Korean companies as well.”