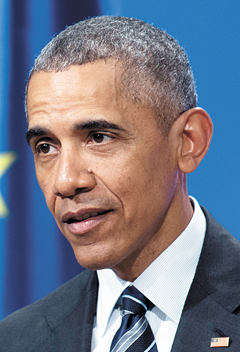 U.S. President Barack Obama said on Tuesday that Washington could “destroy” North Korea with its nuclear arsenal, but that it is restraining itself out of consideration for its ally, South Korea.

“We could, obviously, destroy North Korea with our arsenals,” Obama said in an interview with CBS This Morning that aired on Tuesday, “but aside from the humanitarian costs of that, they are right next door to our vital ally, the Republic of Korea.”

The remarks came as Seoul’s top intelligence agency said Wednesday that North Korea could conduct a fifth nuclear weapons test at any moment, as Pyongyang’s ruling Workers’ Party prepares for a congress that is to take place in early May, the first in nearly four decades.

Obama said that Washington is working on a shield system to cope with North Korea’s nuclear threats.

“One of the things that we have been doing is spending a lot more time positioning our missile defense systems,” he said, “so that even as we try to resolve the underlying problem of nuclear development inside of North Korea, we’re also setting up a shield that can at least block the relatively low-level threats that they’re posing right now.”

Obama called North Korean leader Kim Jong-un “personally irresponsible” and Pyongyang “a massive challenge.” He said it is a “priority” to protect South Korea and Japan, U.S. allies “that are vulnerable to the provocative actions that North Korea is engaging in.”

North Korea conducted a fourth nuclear test on Jan. 6 and launched a long-range rocket on Feb. 7, resulting in a United Nations Security Council resolution and sanctions on Pyongyang.

In February, Seoul and Washington launched formal negotiations on the possible deployment of the U.S.-led Terminal High Altitude Area Defense, or Thaad, system in South Korea, in response to Pyongyang’s nuclear and long-range missile launch.

In a briefing on Tuesday, Mark Toner, a U.S. State Department deputy spokesman, said the “real punch” comes with the stringent implementation of the UN Security Council sanctions on Pyongyang.

Pointing out that Washington restricted North Korean Foreign Minister Ri Su-yong’s movements in response to the SLBM launch, Toner added, “We’re going to look at other options as we move forward if North Korea continues with this kind of behavior.”

Earlier this week, the U.S. State Department announced that it would restrict Ri and other North Korean diplomats’ travel in the United States when they attend UN functions.

In a situation where “North Korea continues to make decisions that we believe are counterproductive,” the spokesman said, Washington has to continually look at what its options are in terms of response.

This is to ensure the security of the Korean Peninsula, but also to make every effort “to convince North Korea to come back to serious discussions about its program,” he said.

The White House’s press secretary, Josh Earnest, said on the same day that in response to a fifth nuclear test by Pyongyang, the United States will “continue to ramp up the pressure on the North Korean regime.”

Lee said that North Korean leader Kim “has maintained the in Kilju County, North Hamgyong province, to be able to launch a nuclear test at any time,” referring to the site of other nuclear tests.

However, the NIS has not been able to determine the exact date of a possible fifth test.

Also according to the NIS report, a group of 13 North Koreans working in a restaurant in Ningbo in China’s eastern Zhejiang province who defected to the South earlier this month was supposed to have been larger.

“There were 20 restaurant workers planning to defect, but seven dropped out because of concerns over their families,” Lee said.