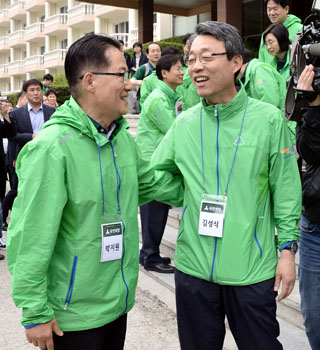 Park, who won his fourth-term in the latest general election, is a former member of the Minjoo Party and a confidant of the late President Kim Dae-jung. It will be his third time to act as floor leader of a political party, since he served the post twice in 2010 and 2012.

The People’s Party also selected Kim Song-sik, a former lawmaker from the Saenuri Party, to be chief policymaker.

The People’s Party, founded by the presidential contender Ahn Cheol-soo after he left the Minjoo Party at the end of last year, scored a considerable victory in the April 13 general election, becoming the third largest power in the National Assembly.

The conservative ruling Saenuri Party won 122 seats, the Minjoo Party won 123 and the People’s Party won 38 in the 300-member legislature that will start its four-year term on May 30.

Following the election, the People’s Party decided to maintain the current co-chairmanship, comprising Ahn and Chun Jung-bae, until the end of this year. Appointing Park by consensus (without voting) completed the third-largest party’s leadership.

Park, a former presidential chief of staff to the late Kim, left the Minjoo Party after it rejected his nomination for the general election.

He then joined the People’s Party and was reelected.

“The 20th National Assembly should be the most productive, hardworking and creative,” Park said. “We should maintain our identity. In addition, we must only serve the people and the country.”

Park also promised that the party won’t be self-serving. “We will cooperate with the Minjoo Party and, if necessary, with the Saenuri Party,” Park said.

While making it clear that the party won’t be swayed by Ahn’s presidential ambition, Park also said the People’s Party, if it performs well, will give the voters a glimpse of what Korea will be like if Ahn becomes president.

Kim, the newly-selected chief policymaker, was famous for his economic insights when he was a member of the conservative party. He served as an elected lawmaker from 2008 till 2012.

As a Saenuri lawmaker, Kim led the party’s reformist group. However, he left the ruling party and joined Ahn’s short-lived presidential campaign in 2012. Since then, he has continued to assist Ahn.