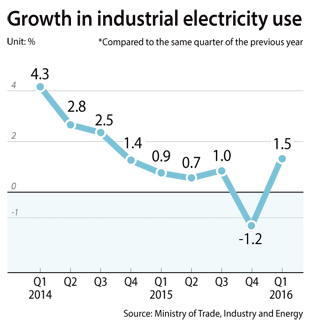 Industrial electricity consumption rose 1.5 percent year-on-year in the first quarter, the most in the past six quarters, according to a report released Thursday by the Ministry of Trade, Industry and Energy.

The year-on-year increase suggests Korean factories are finally speeding up their production lines even though overall economic conditions continue to be sluggish.

Industrial electricity consumption accounts for 53 percent of the total consumption, and the ministry said it increased mainly due to the semiconductor and oil refining industries in the first quarter. The year-on-year growth rate for industrial use reached more than 1.4 percent, the first time since the fourth quarter of 2014.

“Electricity consumption for households rose 2.2 percent year-on-year due to the temperature that was lower than average in the first quarter,” said Kim Sung-yeol, a director at the ministry. The average temperature during the first quarter of last year was 3.1 degrees Celsius (37.58 degrees Fahrenheit), but it dropped to 2.7 degrees Celsius this year.

Electricity consumption for agricultural use has continued to grow for the past 10 years and increased by 4.4 percent in the first quarter compared to a year earlier.

The total number of houses that used an electric power facility on their farms rose from 2.01 million to 2.08 million during the same period, or by 3.6 percent.

People in Gyeonggi consumed the largest amount of energy in the first quarter, followed by Gyeongsang and Chungcheong. Gyeonggi used 22.3 percent of the total and Gyeongsang consumed 16.2 percent.

“Many of the industrial complexes are located in Gyeonggi and its consumption increased by 3.5 percent from the previous year,” Kim said.

Gyeongsang, on the other hand, used less energy this year compared to the previous year as the use by steel and fiber industries dropped.