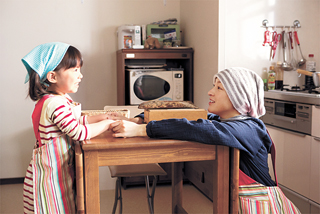 A family prepares to undergo separation with a bowl of miso soup.

Chie (Ryoko Hirosue) finds out that she has breast cancer. However, Shingo (Kenichi Takito) does not leave her but believes that they can overcome the hardship together. They succeed in getting married.

Since she has cancer, she does not expect to have a child. But by some miracle, she becomes pregnant. She gives birth to a daughter and names her Hana.

But the miracle does not last long, for the breast cancer returns, giving the family little time left to be together.

Chie decides to teach Hana her secret recipes to help her survive without a mother.

The film was invited to the 2015 Hawaii International Film Festival. It is not an overwhelmingly sad story. Rather, the film flows with the positive energy of Chie, the encouraging Shingo and the miraculous Hana.

It is based on the real story of Chie, who ran a blog from 2006 to 2008. Her husband published a composite essay on behalf of her, which moved director Tomoaki Akune to bring the story to the big screen.

This is a documentary about the Asian Financial Crisis of the late 1990s, especially in Korea.

During the crisis, foreign investors reaped all the benefits while Korean conglomerates failed to overcome the damage. Who was behind the scenes, and what is happening today?

Director Kong Quee-hyun actually did not know much about how the economy works, having no interest in studying the topic. However, when he was discussing the subprime mortgage crisis that happened in 2008 in the United States, he eventually got to know about other economic crises around the world.

The film deals with the greed of modern society, where people could not help themselves from putting everything at stake to earn profit. It relates to the maxim of high risk, high profit. Thus, the risks to the economy both domestic and international are ongoing.

Also, an interesting feature of this documentary is that it mainly depends on the narration by actor Kim Eui-sung.

The film is similar to last year’s hit movie “The Big Short,” which talked about the dark side of the financial industry two years before the subprime mortgage crisis broke out in the United States. 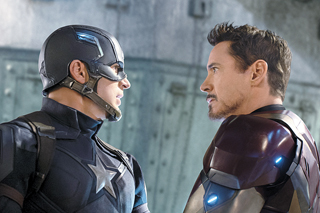 The “Captain America” series is back this year with a new spectacle for moviegoers.

As the subtitle “Civil War” suggests, conflict plays a major role in the latest installment as a fight breaks out within the group of the Avengers over an external factor, the government.

Since accidents both large and small are continuously taking place in the aftermath of the Avengers’ activities, the government suggests a system to manage the members.

Steve Rogers or Captain America, played by Chris Evans, wants to avoid such surveillance by the government. On the contrary, Tony Stark or Iron Man, played by Robert Downey Jr., prefers to go along with the system, considering the future of the team.

However, while they are having this internal fight, the world is in danger from a new enemy.

The film is the follow-up to both “Captain America: The Winter Soldier” (2014) and last year’s “Avengers: Age of Ultron,” all of which are from Marvel Comics.

An unprecedented number of Marvel heroes appear together in this film, including Ant-Man (Paul Rudd) and Spider-Man (Tom Holland), making it a treat for comics fans.

An adolescent boy, Go-hwan (Ryu Deok-hwan), wants to have sexual intercourse before he dies. Since he has only few months left to live, he wants to die as an adult.

However, this is not an easy quest. Even, the father of Go-hwan participates, understanding his son’s desire.

The film showcases the strong friendship of the three as they do anything to help Go-hwan out, not caring about whether they will be scorned. Their relationship creates conflict as well as funny and laughable scenes, so the overall atmosphere of the film is not serious.

However, female moviegoers might feel a little disturbed by the plot, since the boys perceive women as only partners for sexual relations. Furthermore, the film does not address the issue that terminal illness does not give the adolescent boy a free pass to have sexual intercourse.

Nonetheless, the comedy genre pardons such heavy issues. Without thinking too deeply about the plot, moviegoers can laugh all the way through the film. 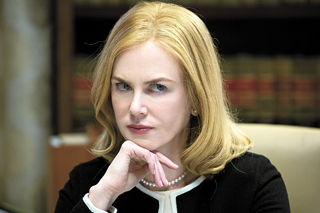 A young woman’s body was found in a trash can, but the case remains unsolved. After 13 years, the suspect has appeared once again. This time, the case must be put to rest.

The film is in the spotlight with an all-star cast, including Julia Roberts playing the role of Jess, Chiwetel Ejiofor as Ray and Nicole Kidman as Claire.

Jess sees her daughter being dumped after being sexually abused. Ray and Claire help her find the suspect. However, the investigation is not going well and is dismissed with many mysteries remaining.

The film explores the investigations of the past and present alternatively, so moviegoers can see how the cases relate.

The film is based on the novel of the same name written by Eduardo Sacheri. The novel was first adapted for the big screen in “El Secreto de Sus Ojos” (2009), an Argentine film that won Best Foreign Language Film at the 2010 Academy Awards.

Using Los Angeles as the backdrop, director Billy Ray portrayed the sense of urgency of the city and the darkness lying just beneath the bright surface.

Moreover, this movie is the first time that Roberts and Kidman are sharing the screen. Moviegoers cannot miss the opportunity to see them acting side-by-side, as well as the thrilling suspense of the film. 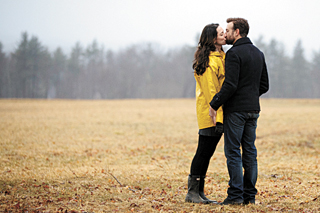 Hannah (Rebecca Hall) misses her husband, Hunter Miles, who died all of a sudden after the successful release of his only album. She lives in a peaceful town in Maine, alone.

One day, Andrew McDonnell (Jason Sudeikis) visits Hannah in order to write a biography of Miles. He wants to know the hidden truth of his death. While the investigation continues, they gradually get to know each other better. However, the time is limited and he has to leave.

Will Hannah be able to love someone again?

Director Sean Mewshaw tried to manifest the pain of starting a new love story and the unexpected changes in life. He also gained inspiration from Jeff Buckley and Elliott Smith, who lived short but legendary lives.

Though the death of loved ones is the main theme of the film, it does not emphasize the sadness but plainly shows how people overcome such sorrow.

Furthermore, folk songs play important role in the movie as a mechanism to portray the sentiments of Hannah, who cannot let go of memories from the past.

Hall rose to stardom from the films “Iron Man 3” (2013) and “Transcendence” (2014). In this film, she shows the sophisticated changes of emotion of a heartbroken woman.