Beyonce kicks off tour without giving any answers

Beyonce kicks off tour without giving any answers 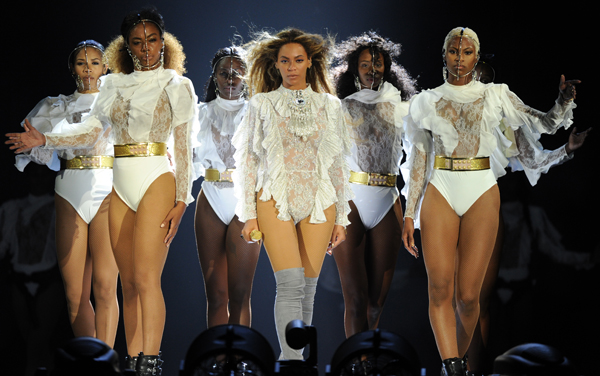 Beyonce performs during the Formation World Tour at Marlins Park on Wednesday in Miami. [AP/NEWSIS]

MIAMI - Whether scorned woman or confident seductress, Beyonce moved seamlessly between the two on the opening night of her Formation World Tour in Miami, offering no insight into the rumors of marital infidelity fueled by her latest album.

Queen B came out swinging Wednesday in an oversized black western hat and bodysuit, trading her normal stilettos for military-style combat boots. She opened the show with “Formation” and had the crowd in a frenzy as she moved to her latest anthem “Sorry,” noticeable scorn in her tone as she sang, “Tonight, I regret the night I put that ring on.”

Both songs were from “Lemonade,” which she released days earlier in an HBO special with full visuals. Much of the album appeared to tie into Beyonce’s life, and lines like “Are you cheating on me?” raised questions of whether her husband, Jay Z, had been unfaithful.

Her opening anthems were fueled by red lights and hot fireballs shooting into the night sky to punctuate her rage - and the angrier she got, the more excited the crowd grew. At one point, Beyonce donned a sequined bodysuit studded with red flames as she sang about her plans to “smack that trick” as a tempestuous lightning storm raged on a screen behind her and later a red, she-devil-esque number.

Just when you thought she was in full-on fury, she switched to the overtly sexual “Rocket” and “Drunk in Love,” a song seemingly about her once hot and heavy marriage. She drew from an older song, “Me, Myself and I,” to remind the crowd “I’m going to be my own best friend,” and brought two girls from the audience who had perfected the choreography to the much-mimicked “Single Ladies.”

She moved so skillfully between vulnerable and in control, that it was impossible to tell what was real and how much was artistic posturing.

Beyonce did not mention her husband - aside from a quick thank you at the end - and said little about her new album, noting only that her favorite song was “All Night,” a slow number that starts, “I’ve found the truth beneath your lies.” There was no mention of the presumed other woman, the much-discussed “Becky with the good hair.”

Noticeably absent from the two-hour concert were the political undertones of her Super Bowl halftime show earlier this year, where Beyonce’s dancers donned berets, sported Afros and wore all black, similar to the style of the Black Panther party.

Police unions urged officers not to volunteer or work at her shows and criticized what they called her “anti-police” messages. The police presence at the Miami show seemed normal, and media reports have revealed that security sign-ups for her upcoming Tampa show have not been an issue.

She also did a quick cover of the Eurythmics’ “Sweet Dreams,” cast her stage in purple to honor Prince during a costume change while “Purple Rain” played and dedicated her final number “Halo” to the late star as fireworks shot into the night sky.

“Prince, thank you for your beautiful music. ... He’s an artist that inspired all of us,” she said.

In perhaps the most meaningful moment, Beyonce said her daughter reminded her on the way to rehearsal earlier in the day that “when I was a little girl and I dreamed, I dreamed of this day right now. ... You’re witnessing my dream coming true right now.”

Later, a montage of Jay Z holding the couple’s newborn child in the hospital played as she sang - a reminder that the last time she toured, she headlined with her husband. Wednesday’s show also included a snippet from Jay’s grandmother’s 90th birthday telling the crowd she turned life’s lemons into lemonade.

And Beyonce - whatever state her personal life and marriage is in - appears to be doing the same. Her commanding performance of “Freedom” served as reminder to the world that she “breaks chains all by myself. I’m gonna keep running because a runner don’t quit on herself,” she sang as her dancers splashed about an onstage pool. She carried that theme into “Survivor,” encouraging those in the crowd who had “survived anything in your life, I want you to celebrate with me tonight.”

And, just to keep everyone guessing, she gave a shout-out to her husband at the end. “I want to dedicate this song to my beautiful husband,” she said. “I love you so much.”