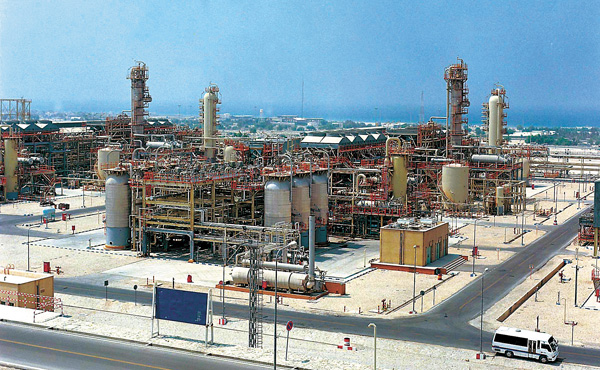 International economic sanctions on Iran were lifted in January, and Korean companies have wasted no time getting back into the market.

They will be the first major contracts won by a Korean company since GS Engineering & Construction (E&C) won a gas field development project in South Pars in October 2009 - which was before economic sanctions levied by the international community in 2010.

Daelim’s advantage was its strong connection with Iran. The contractor maintained four employees in Iran even after the economic sanctions went into effect. That kept its networks going - and earned points with Iranian government officials and businesspeople.

Daelim is known for having successfully completed the Kangan gas refining building project during the Iran-Iraq War. In 1998, the year that war ended, 10 of its employees were killed in an airstrike by Iraq. The contractor has completed 26 projects worth $4.55 billion in Iran over the past 40 years.

“Earning and keeping the trust of clients is very important,” a Daelim spokesman said. “No matter what happened, it was important for us to finish our jobs there. We have been carefully monitoring what is going on in Iran, and we are happy to resume our partnership with the country this time.”

Daelim isn’t the only company with such a history. Contractors like Hyundai E&C, Daewoo E&C, Samsung C&T and GS E&C have similar experiences. They also maintained offices in Iran all through the sanctions, even though they couldn’t do any business, to keep up their connections. 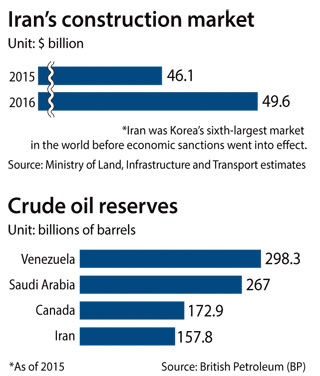 Earlier this year, the Iranian government announced the launch of large construction projects totaling 214 trillion won ($186 billion) through 2020. The big opportunities are in construction, automobiles, information technology and consumer goods. Iran is poised to grow faster than most countries in the Middle East, thanks to its nuclear accord with the international community and its enormous oil and gas reserves.

“Korean companies and Iran are expected to carry out new deals as early as the second half of this year,” said Kim Hyung-keun, a researcher at NH Investment & Securities.

“Major contractors that have experience in Iran will try to penetrate sectors they are strong in. Daelim will knock on the doors of the gas and oil refining companies, while Hyundai will look into power plant projects and Daewoo will focus on industrial infrastructure.”

Construction is the most promising sector.

According to the International Contractors Association of Korea, Korean companies have completed 91 projects worth $1.2 billion through 2009, and Korean builders could win projects of up to $20 billion in the next few years, nearly twice the size of contractors’ overseas orders this year, which hit $11.8 billion as of last month, a 44 percent drop from a year earlier. Last year, Korea only won $46.1 billion worth of projects, the lowest amount since 2007, mainly due to shrinking demand in the Middle East.

Hyundai Engineering is close to signing a framework agreement on the South Pars gas field’s phase 12 extension work worth $3.6 billion. Hyundai E&C and Posco Daewoo are trying to join a project building a 1,000-bed hospital for Shiraz University of Medical Sciences worth $500 million.

Now that sanctions are removed, Iran is preparing to export more crude oil. According to industry data, Iran currently has 30 million to 50 million barrels of oil ready to be shipped. The Iranian government said in April that it will increase its daily crude oil exports from two million barrels to four million barrels until next March. That policy will positively impact Korean oil refiners, as the average international oil price is expected to fall.

In January and February, Korea imported twice as much crude oil from Iran than it did last year, and that significantly helped oil refiners improve their profits. Korea’s No. 1 oil refiner, SK Innovation, reported 844.8 billion won operating profit in the first quarter, a 153.2 percent rise from a year earlier. Iranian crude is about $2.5 cheaper per barrel than Saudi crude.

Korean automakers like Hyundai Motor, which is sending its president, Chung Jin-haeng, as a member of President Park Geun-hye’s delegation, expect to resume their partnership with Iran.

“Car sales in Iran shrank from 2011’s 1.7 million units to 1.1 million units in 2014, but we believe that the market will grow in the future, as the country’s overall economy is expected to boom,” said Hwang Kwan-sik, a spokesman for the carmaker.

“Opportunities in consumer goods like cosmetics and electronics, as well as airlines, will be seen in Iran,” said Joo Won, a researcher at Hyundai Research Institute, “and the most important key to successfully launching businesses will be financing. The Korean and Iranian governments need to seriously discuss how they will support businesses.”