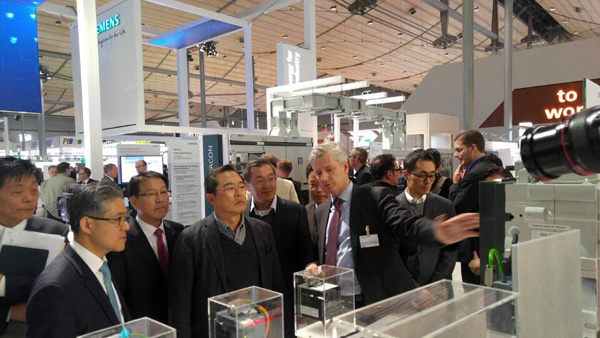 LS Group Chairman Christopher Koo is traveling halfway across the world this month to find a new growth engine for the company.

The company said it is focusing on foreign markets since most of the infrastructure for electricity in Korea has already been developed, while many other countries around the world have relatively poor systems.

“Moreover, some of the developed countries’ electricity infrastructure is now becoming deteriorated, so we expect that we will also be able to enter those countries in the future,” Kim Dae-sung, a director at LS, said on Thursday. “Currently, more than 60 percent of the business profit for some of our affiliates comes from foreign markets.”

Koo first visited Japan and met with Shigeru Oi, CEO of JX Nippon Mining & Metals, earlier this month. Upon his return from Japan, Koo flew to Germany on Monday and had a meeting with Ralf Christian, CEO of the energy management division at Siemens.

Koo and Oi discussed various ways to improve their partnerships in trading raw materials, according to LS Group.

Kim said that after Koo’s meeting with Christian in Germany, they “agreed on the importance of Industry 4.0, or the fourth industrial revolution, and that it needs to become standardized globally.”

While he was in Germany, Koo also went to Hannover Messe, the world’s largest industrial technology trade fair. LS has been participating in the fair for the past 17 years, and this year, the company showed off a high-voltage direct current electric power transmission system.

Koo will also be part of an economic mission consisting of representatives from 236 of the nation’s businesses heading to Iran with President Park Geun-hye next month.

“Iran’s infrastructure for electricity and communication is quite poor, and we expect LS will take on a big role in developing it,” Kim said.

Meanwhile, the group’s main affiliate, LS Cable & System, won a contract worth $100 million in North America and another worth $55 million in Denmark this year.