Phone mix pays off for Samsung

Phone mix pays off for Samsung 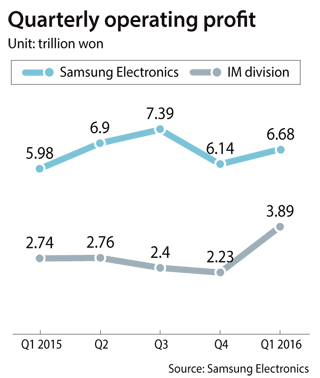 Samsung Electronics announced Thursday that it posted 6.68 trillion won ($5.87 billion) in operating profit for the first quarter, up 11.7 percent from a year earlier, on stronger-than-expected sales of its strategic mix of the flagship Galaxy S7 model and lower-end smartphones.

Revenue for the January-March period advanced 5.7 percent year on year to 49.78 trillion won. Both the revenue and operating profit hovered above analysts’ estimates of 49.14 trillion won and 5.62 trillion won, compiled earlier by stock information provider FnGuide.

Samsung expects the solid performance to continue through the April-June period, led by steady earnings in the mobile and semiconductor businesses, and improved sales of consumer electronics and display panels.

The country’s most valuable company also estimated that the weaker Korean won versus the U.S. dollar and euro in the first three months contributed to the operating profit by approximately 400 billion won.

The company said the buoyant result was mainly driven by the early launch of the Galaxy S7 and its Galaxy edge cousin by about a month. Strategically allocating low-end Galaxy smartphones to optimal regions also helped. Quarterly profit shot up 73.1 percent compared to the previous quarter, marking the best record since the second quarter of 2014 at 4.42 trillion won.

The upbeat report comes two days after Samsung’s smartphone archrival, Apple, published a larger-than-expected decline in revenue and earnings in the first three months of this year, hit by iPhone shipments falling 16 percent year on year and weakened sales in China.

“The Galaxy S7 and edge have shown upbeat sales across the United States, Europe and other parts of the world compared to their predecessors,” Lee Kyeong-tae, vice president of the IM division at Samsung Electronics, said during a conference call Thursday morning. “We have simplified lower-end smartphone lines and administered marketing expenses in a more efficient manner to greatly improve cost structure.”

Starting in late 2014, Samsung focused on the Galaxy A and J in the non-premium smartphone segment, as competition from Chinese producers like Huawei turned fierce. The Galaxy A has been well received in Europe and China, while the J model has seen resilient growth in emerging markets, Lee said.

“Samsung Electronics relies heavily on its IM division, which means that should there be any grim outlook for the smartphone business, it will weigh on the entire company,” said Greg Roh, head of research at HMC Investment Securities. “That fear has been reflected in the share price.”

The world’s No. 1 memory chipmaker’s semiconductor business reported an operating profit decline for the first quarter, a 10.2 percent drop year on year to 2.63 trillion won.

The first-quarter operating profit of the company’s consumer electronics division swung from minus-140 billion won a year earlier to 510 billion won, thanks to robust sales of premium products such as super-ultra high-definition TVs and refrigerators in its Chef Collection lineup.

The company also announced in a regulatory filing that it would launch the third phase of its 2 trillion won share buyback program today. Over the coming three months, the tech giant plans to cancel 1.3 million common shares and 0.32 million shares.

LG Electronics later in the day reported an operating profit of 505.2 billion won for the first quarter, a year-on-year increase of 65.5 percent. It is the company’s best quarterly profit in seven quarters. Revenue for the same period was down 4.5 percent from a year earlier to 13.36 trillion won.