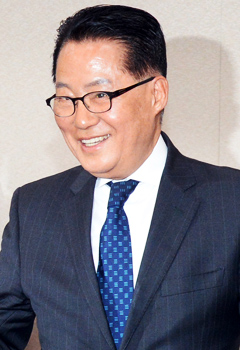 The People’s Party will support a Saenuri Party National Assembly speaker if President Park Geun-hye admits to her failed performance, the newly selected floor leader of the People’s Party, Rep. Park Jie-won, said Wednesday. Park gave an exclusive interview with the JoongAng Ilbo following his appointment as floor leader to discuss his role as the chief negotiator of the third-largest party in the legislature.

The People’s Party, founded by presidential contender Ahn Cheol-soo after he deserted the Minjoo Party of Korea at the end of last year, scored a considerable victory in the April 13 general election.

The conservative ruling Saenuri Party of President Park won 122 seats, the Minjoo Party won 123 and the People’s Party won 38 in the 300-member legislature that will start its four-year term on May 30.

“If President Park honestly admits to her failure in running the country over the past three years and asks us to cooperate on the National Assembly speaker issue for the success of her remaining two-years in office, we will do so for the country and for the people,” Park said.

“The National Assembly speaker should be selected based on the voters’ will expressed in the general election, so the [Minjoo Party] should produce the speaker,” he said. “But it is more important to think what will be more effective for the people and the country.”

With the emergence of a three-party system for the first time in 20 years, the once-ceremonial position of speaker will become more important than ever.

The National Assembly speaker, the second-highest position after the president by order of precedence, was a post that senior lawmakers from the president’s party often occupied before retirement.

The role will be redefined in the 20th National Assembly, and several heavyweights of the Minjoo Party have already declared bids.

The largest party in the assembly has the power to nominate the National Assembly speaker and chairmen of key standing committees.

The Saenuri Party fears that an unfriendly speaker will impede passage of contentious economic bills during the remainder of Park’s presidential term.

According to the National Assembly Act, legislative schedules are decided by the speaker based on a consultation with negotiation blocs, which are parties with more than 20 legislators.

Since it does not require an actual agreement, a Minjoo speaker could decide legislative schedules without a Saenuri consensus.

Although the speaker’s power has been curtailed in recent years, the speaker can still introduce a bill directly to a voting session without required committee approvals. The speaker also has the right to stop lawmakers’ speeches during a main session.

There is scant possibility for a Saenuri speaker in a legislature dominated by liberal rivals. Even if the Saenuri, which won 122 seats, manage to recruit seven conservative independents, they would still be outnumbered by liberal lawmakers. Aside from the Minjoo’s 123 seats and the People’s Party’s 38, the Justice Party has six.

But if the People’s Party supports a Saenuri candidate, the ruling party could hold onto the speaker’s position for the 20th National Assembly.

Park’s remark was a clear indication that the People’s Party will exercise its power as a deciding vote from now on.

Park continued to promote the idea on Thursday, citing a precedent in which the ruling party still produced the National Assembly speaker when it was outnumbered by the opposition.

“In 1988, Kim Dae-jung, who was head of the main opposition party at the time, conceded to the ruling party to produce the National Assembly speaker for stable operation of the government,” Park said. He added that the People’s Party has already completed case studies on across-the-aisle cooperation.

The legislature had four parties in 1988. Although the ruling Democratic Justice Party of President Roh Tae-woo was the largest group with 125 lawmakers, the three opposition parties cumulatively occupied 164 seats.

Roh sought the cooperation of Kim, who was head of the largest opposition Party for Peace and Democracy. As a result, Kim Jai-sun, a ruling party lawmaker, was able to become the speaker.