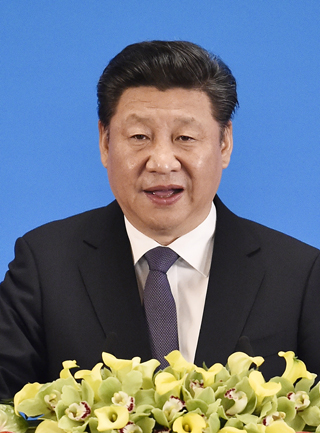 Chinese President Xi Jinping speaks during the opening ceremony of the Conference on Interaction and Confidence Building Measures in Asia at the Diaoyutai State Guesthouse in Beijing on Thursday. [AP/NEWSIS]

Chinese President Xi Jinping said Beijing will not allow “war or chaos” on the Korean Peninsula at a regional foreign ministers meeting on Thursday amid heightened tension in the region as Pyongyang shows signs it may conduct another nuclear test.

Foreign ministers, including the top envoys of South Korea, China and Russia, gathered for the Conference on Interaction and Confidence Building Measures in Asia (CICA) in Beijing and later adopted a joint declaration strongly condemning North Korea for its nuclear and ballistic missile provocations.

“China fully complies with the UN Security Council resolution on North Korea,” Xi said in a speech at the opening ceremony of the forum at the Diaoyutai State Guesthouse, while emphasizing Beijing’s commitment to denuclearization of the Korean Peninsula.

“As a close neighbor of the peninsula, we will absolutely not permit war or chaos on the peninsula,” Xi said. “This situation would not benefit anyone.”

South Korean intelligence sources have assessed that Pyongyang is ready to conduct a fifth nuclear test at any moment, which would be in violation of United Nations Security Council resolutions. This includes the one adopted with the support of China on March 2, which called for the strongest-ever sanctions to be implemented on the North. North Korea conducted a fourth nuclear test in January despite Beijing’s warnings against it, followed by a long-range missile launch one month later.

In its joint declaration, the fifth CICA meeting of foreign ministers said they “condemn in the strongest terms” North Korea’s Jan. 6 nuclear test and launches that used ballistic missile technology on Feb. 7, April 15 and April 23 “in violation and flagrant disregard of the UN Security Council’s relevant resolutions.”

Their statement added that the ministers agreed to “implement the resolution thoroughly and fully and will further strengthen international cooperation so that [the Democratic People’s Republic of Korea] must abandon its nuclear program in a complete, verifiable and irreversible manner.”

This is the first time the foreign ministers at CICA adopted a joint communique that demanded North Korea’s denuclearization.

However, the statement also called for “efforts to create conditions” to resume the long-stalled six-party talks through dialogue.

The six-party talks among China, Japan, Russia, the United States and the two Koreas have been stalled since late 2008, when Pyongyang walked out.

“Earlier this year, we witnessed North Korea, the only country that has conducted nuclear tests in the 21st century, engage again in its fourth and latest one,” South Korean Minister of Foreign Affairs Yun Byung-se said at the meeting.

He added that “the eyes of the world are now on North Korea, whether it will conduct a fifth nuclear test in time for the seventh party congress.” Pyongyang is gearing up for its first ruling Workers’ Party congress in nearly four decades, which it says will start May 6.

The minister used language strongly critical of North Korea, saying that no country in the history of the United Nation matches it for “being such a persistent and flagrant serial offender.”

Pyongyang has “brazenly announced” it would conduct more nuclear tests, and the “belligerent rhetoric” is being translated into action, he pointed out.

Yun went on to call for the international community to stand firm in taking a united and coordinated stance to block advances in North Korea’s nuclear weapons capabilities and stop another nuclear test.

He said Pyongyang is using “nuclear blackmail against the international community” and pointed to the systematic violations of human rights on the North Korean people.

“I also hope that our CICA partners, as regional countries, demonstrate their leadership in thoroughly implementing UN Security Council Resolution 2270,” he said, to help Pyongyang make “the right strategic choice.”

CICA, which has 26 member states, was first launched in 1992 and has become a multinational forum for enhancing cooperation toward peace, security and stability in Asia.

“This was an opportunity for the collective determination of the international community to be more clearly displayed to North Korea,” said Cho June-hyuck, a spokesman for the South Korean Ministry of Foreign Affairs, in a briefing in Seoul.