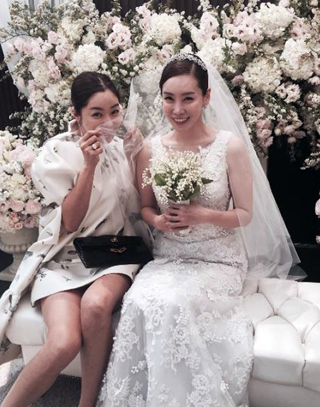 The 41-year-old actress held a small wedding ceremony on Friday with her Korean-American groom in Samcheong-dong, central Seoul, instead of in the United States as they had initially planned. The two have reportedly been in a romantic relationship for four years prior to their marriage.

“I am truly blessed to be able to marry someone who always embraces my flaws,” Kim said last year when announcing her engagement.
Kim’s fellow celebrities Lee Hye-young, Ko So-young and Kim Hee-ae made it to the wedding to celebrate with the bride.

Lee Hye-young posted a photo of herself and the bride holding the flower bouquet on her social media account. The post read, “Jung-eun… I sincerely congratulate you… and be happy!”