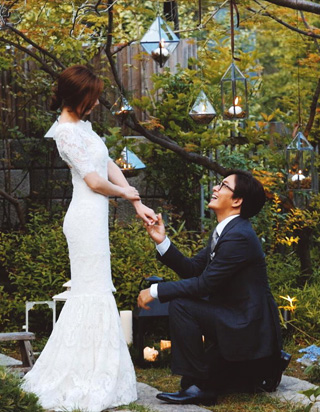 Park’s agency, Keyeast Entertainment, announced Friday that the actress is pregnant.
“Other relevant details will be revealed after getting the medical check-up that is scheduled for next week,” the agency added.
The couple shocked fans last May by announcing their romantic relationship and wedding plans.

The actor debuted in the drama scene in 1994 and rose to stardom with his role in the highly successful and popular drama “Winter Sonata” (2002), which paved the way for the Korean drama industry in global markets.

Yonsama, as the star is called in Japan, is recognized as a pivotal figure in the birth of Hallyu, or the Korean Wave, from which many other Korean celebrities are still benefiting.

The actress started out as a member of the K-pop girl group Sugar and later became a TV actress. She appeared in several dramas and also hosted the food show “Tasty Road.” She is currently starring in the reality show “Disciples of Oksu-dong” on O’live TV.