CEO donates to an academy to nurture leadership

CEO donates to an academy to nurture leadership 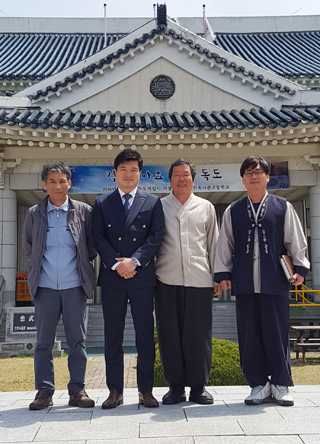 Lee Jin-woo, CEO of Hironic, second from left, poses in front of the Korean Minjok Leadership Academy in Hoengseong County, Gangwon, with headmaster Cheong Jean-gon, third from left, and other teachers after donating to the school on April 20. [KOREAN MINJOK LEADERSHIP ACADEMY]

Korean Minjok Leadership Academy, a boarding school in Hoengseong County, Gangwon, has a scholarship sponsored by Hironic, a midsize company that produces cosmetics and medical products for dermatology and plastic surgery clinics.

Hironic has donated 1 percent of its net profit for the past six years totaling 160 million won ($140,000) for the scholarship. The academy, which is nicknamed Korea’s Phillips Academy, has picked 10 students from economically-challenged households each year to receive the scholarship. They get free tuition.

Lee Jin-woo, 42, the CEO of Hironic, said the company began with a 5 million won donation, and the donation surged to as much as 58 million won last year.

“As the company grew in size over time, the pleasure of donating has also doubled,” Lee said.

Although the entire medical products industry was hit hard by the outbreak of Middle East respiratory syndrome last year, Hironic contributed 28 million won this year. “It’s nice to be able to keep our promise,” Lee said.

Lee entered the medical products industry in 2003 as a salesman. He established BSP Medical, the predecessor of Hironic, in 2006. One day in 2008, he read the autobiography of the academy’s founder, Choi Myung-jae, who also founded Pasteur, a dairy producer acquired in 2010 by Lotte Food.

The autobiography is titled “It’s Your Turn to Speak 20 Years From Now.” Lee was inspired by one particular sentence: “A country becomes rich only when it has an excellent leader with national consciousness.” He made up his mind to donate to the academy but couldn’t for a few years because his company was suffering in the wake of the 2008 global financial crisis.

“I still remember the faces of the staff at the academy, who so appreciated my small initial donation,” he said. “The company performed better after I began donating. Hironic is being highly recognized in the industry, which is dominated by European and U.S. producers, because it has a number of outstanding workers. Companies should pay more attention to fostering good human resources.”

Lee’s goal is to raise his donations from 1 percent of the company’s net profit to as much as 10 percent.

“Ever since our school was launched in 1996, 1,900 students have graduated,” said Cheong Jean-gon, the school’s headmaster. “But the financial situation became aggravated after Pasteur went bankrupt in early 2000. Hironic has remained the sole corporate donator ever since.”

Lee cares a lot about employee welfare, too. Hironic provides dormitories for younger workers who cannot afford hefty rents and lends other employees key money so that they can rent apartments.

“There aren’t a lot of quality workers who are willing to work for a smaller company,” Lee said. “That’s why I am so grateful to those working for my company, and I feel their importance each and every day.”