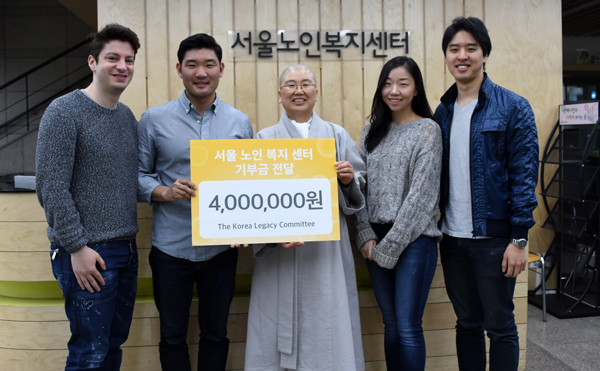 On the evening of March 19, in a small cafe in downtown Seoul, the room was abuzz with revelers at a White Day-themed party. The Hallmark holiday is when Korean and Japanese men reciprocate their girlfriend’s Valentine’s Day treats.

But on that evening, a video was also screened describing an organization dedicated to helping low-income elderly people. The themed party was a fund-raiser thrown by the Korea Legacy Committee to raise money for a group of senior citizens who are making a movie that will be submitted to an independent film festival. Guests were invited via social media.

The committee raised about 4 million won ($3,500) from entry fees of about 30,000 won and by selling candy at the party. The money will be donated to the Senior Welfare Center of Seoul.

The Korea Legacy Committee is a nonprofit organization founded by eight young people to help poverty-stricken elderly Koreans. Many of the members are in their 20s to 30s, and range from people starting their careers to CEOs of start-ups. So far, it has organized three charity events and raised a total of 7.5 million won in donations.

The committee is the brainchild of Korean-American Mike Kim, 32, who came to Korea for the first time in 2014. Kim works for the company that created the food delivery app Baedal Minjok.

“When I was in the United States, my grandparents often told me that I should help other people if I go back to Korea,” Kim said. “I formed this committee after finding out that there are a lot of elderly in Korea who do not receive sufficient support to enjoy happy and healthy lives.”

“In the United States, young employees spend time doing volunteer work,” Tetto said. “I was surprised that a lot of Korean workers rarely participate in social activities since they are busy with late-night socializing and overtime work. I joined the committee because I wanted to change their ways.”

Composed of young people with little experience, the committee had a difficult time organizing its parties. They had to book venues and invite performers. Many of the companies that they asked for support from were reluctant. The fact that fund-raising parties are uncommon in Korea didn’t help.

“Since Korea isn’t used to a party culture, it was difficult to receive support, and we didn’t raise a lot from the charity parties,” said Martin Ko, a CEO of a start-up company.

Despite a difficult start, however, the committee quadrupled their donations from 500,000 won last August to 4 million won in March.

The Korea Legacy Committee is planning to expand their activities.

“We are planning to open a volunteer program where we will make gimbap [Korean-style sushi rolls] for senior citizens,” Tetto said. “We don’t want to merely donate money. We want to organize various activities that will give inspiration to young people to do good.”