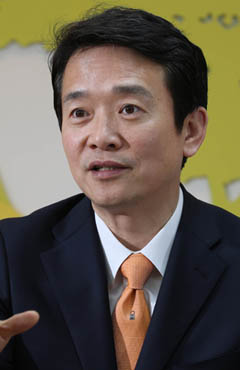 Gyeonggi Gov. Nam Kyung-pil’s proposal of a coalition government has made him a man to watch in Korean politics - and a possible presidential candidate.

“The seminar has been planned to evaluate the experience of the Gyeonggi Provincial Government in attempting a coalition government,” an official planning the seminar said. “Since Korea now has three political powers, we will also be discussing possible cooperation with them.”

Governor Nam’s aides said that they are planning to invite the heads of all three major political parties to the seminar.

The Gyeonggi Provincial Government has been experimenting with a coalition government since the local elections of 2014. Nam was a Saenuri Party candidate, and after being elected, he announced a coalition government with the then-main-opposition New Politics Alliance for Democracy (NPAD), the predecessor of the Minjoo Party. Lee Ki-woo, a former NPAD lawmaker, was elected as vice governor for social integration.

Additionally, positions such as vice governor and those within the health and welfare, environment and gender equality departments have also been assigned to members of the Minjoo Party.

Nam will travel from Saturday to May 8 to Italy, Germany, Croatia and Bulgaria to meet people with expertise in coalition governments.

Some analyst see Nam’s moves as the start of a possible run for the presidency next year.

In a radio interview, Rep. Park Jie-won, who was unanimously selected by the People’s Party to be its floor leader in the 20th National Assembly, hinted that a coalition with the conservative ruling party would be difficult.

“[The People’s Party] will not make such a political mistake by forming a coalition with the Saenuri Party,” said Rep. Min Byung-doo of the Minjoo Party. “Because that means the People’s Party would be willing to take responsibility for the failures of the Park administration.”