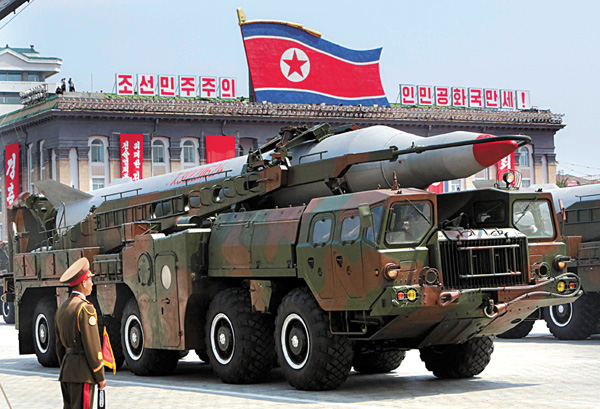 A Musudan intermediate-range ballistic missile is displayed at a military parade to commemorate the 60th anniversary of the armistice of the 1950-53 Korean War at Kim Il Sung Square in Pyongyang on July 27, 2013, in this picture released by North Korea’s state-run Korean Central News Agency. North Korea experienced three failed tests of Musudan missiles in the past two weeks. [NEWSIS]

Following the failed test of a Musudan missile early Thursday, North Korea fired another Musudan missile at around 7:26 p.m. from the eastern port city of Wonsan, according to the South Korean military. South Korea and the United States concluded that both launches failed.

It was the third consecutive failure of a Musudan missile in just two weeks, marking a total failure for the North to test-fire the IRBM, which can deliver a nuclear warhead to any part of Japan and as far as Guam, with a range of around 3,500 kilometers (2,175 miles).

The 15-member United Nations Security Council met Friday in New York for an informal consultation in the wake of the ballistic missile launches at the request of the United States.

North Korea’s three Musudan missile launches, just days ahead of the seventh congress of its ruling Workers’ Party of Korea, is seen as an embarrassment for North Korean leader Kim Jong-un, who is trying to rack up achievements for the congress.

Jeong Joon-hee, a spokesman at the South’s Ministry of Unification, said Friday that North Korea seemed to have rushed the launches of the three mid-range ballistic missiles to have accomplishments to boast of at the party congress next week.

Experts said it is not normal to launch a missile after a recent failure. They said a failed test usually requires one to two months of assessment. The most likely reason for its hurried missile tests is that the North wants a successful launch of an IRBM ahead of a nuclear test.

The first failed Musudan missile test was on April 15, which was seen as a celebration of the 104th birthday of North Korea’s late founder, Kim Il Sung. The missile, which was first deployed in 2007, was launched from a transporter erector launcher, a missile-launching vehicle. Seoul and Washington concluded it was a failure, as the projectile exploded shortly after taking off.

“Kim Jong-un, who is desperate for a successful congress [of the Workers’ Party], is out of step at the last minute,” said Kim Dong-yeop, a professor at the Kyungnam University Institute for Far Eastern Studies, raising concerns that Kim will carry out provocations in a fit of anger.

Moon Sang-gyun, a spokesman at the South’s Ministry of National Defense, said on Friday that North Korea could launch more Musudan missiles in the near future, adding that the military is maintaining heightened readiness.

He said the military believes North Korea has finished preparations for a fifth nuclear test.

The North, which also conducted a test of a submarine-launched ballistic missile last Saturday near the city of Sinpo, has not officially publicized the failed tests. It hasn’t been determined whether last Saturday’s test was a success or a failure.