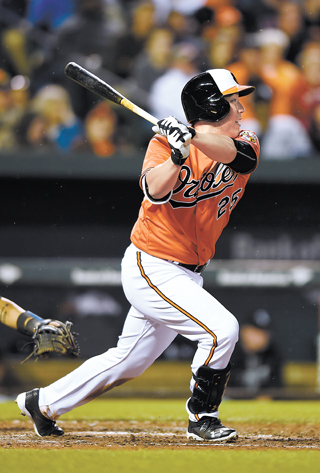 Baltimore Orioles outfielder Kim Hyun-soo hits a single off a splitter by Chicago White Sox pitcher Mat Latos in the fourth inning of the Orioles’ game on Sunday. Kim had three hits against the White Sox on Sunday, including his first double of the season. [AP/NEWSIS]

April flashed by for baseball fans in Korea. Not only did the Korea Baseball Organization (KBO) league kick off but they had more players to cheer for in the Major League Baseball (MLB) as well, with KBO favorites like Park Byung-ho playing for the Minnesota Twins, Oh Seung-hwan for the Saint Louis Cardinals, Lee Dae-ho for the Seattle Mariners and Kim Hyun-soo for the Baltimore Orioles.

April was a good month for Park, who is rising above the rest as a slugger with what ESPN has called “prodigious power.” Park has been hitting long balls left and right, possibly pulling off some of the farthest-travelling hits seen by Twins fans at Target Field, the home park of the Twins.

Park’s first homer came on April 9 when he blasted a pitch by Kansas City Royals’ Joakim Soria. Park’s dinger surprised everyone as it travelled 441 feet in the Royals’ home Kauffman Stadium.

Park struggled after his first home run, continuing to whiff on pitches in a stretch that brought his batting average (BA) down near .200. His second dinger, however, was enough to silence his critics as it recorded an astonishing 466 feet, putting Park third in MLB rankings in terms of true distance of home runs.

It looks like he’s adapted himself to the heat and drama of the Major League and his status on the team is solid. On April 25, Park played against the Washington Nationals as fourth in the batting lineup, a position known as cleanup hitter that is reserved for one of the best hitters on the team. As of Sunday, Park’s numbers stand at .227 BA, eight runs batted in (RBI) and six home runs.

Cardinals’ Oh is the only pitcher in the bunch, whose trademark is four seam fast balls. With his fastballs, Oh was named the saves leader for two consecutive years in 2014 and 2015 in Japan’s Nippon Professional Baseball Organization (NPB). But ironically, those who were pessimistic about Oh’s competitiveness in the MLB were most worried about his fastballs, which are slow by big league standards.

In response, the pitcher has been relying on his sliders. 60% of the balls he’s thrown so far have been fastballs and about 28% of them have been sliders. As of Sunday, Oh’s thrown in 12 games, or for 13 innings, carding one win and 1.38 earned run average. Unfortunately, the “Stone Buddha,” who grabbed 80 saves in the NPB as the closer for the Hanshin Tigers, is unlikely to grab the same position on the Cardinals. That job is taken by Trevor Rosenthal, who’s had 93 saves in the past two seasons. Still, Oh is likely to maintain the setup man position he’s maintained through April moving forward.

The Mariners’ Lee had a rough start. Competing for the starting position was not even an option for Lee, who had a bigger thing to worry about, namely being listed on the 25-men roster for the Mariners. After signing a minors deal with the team, Lee was invited to join the Mariners’ spring camp, an exceptional opportunity for the 33-year-old to prove he was majors material. His effort paid off, as Lee triumphantly entered the season on the roster after surviving the spring camp. Since then, he has been platooning with Adam Lind.

Unfortunately, Lee has been unable to see much playing time, as he only comes into the game when the opposing team’s pitcher is a leftie. Still, Lee has managed a few big moments in the Majors. The most noteworthy play was against the Texas Rangers on April 14 when Lee drove a walk-off homer to lift the Mariners out of a six-game skid. His continuously solid showings led the Mariners coaching staff to form a starting lineup in which Lee played first baseman while Lind played designated hitter on April 28 against the Houston Astros, despite the starting pitcher for the Astros being right-hander Collin McHugh. Lee’s belted a .280 BA, two home runs and three RBIs as of Sunday.

Things have been toughest for the Orioles’ Kim. Confidence was initially high in Kim, evident in his two-year contract worth $7 million. But a dry spell on the plate during the spring camp provoked the ire of the Orioles fans as well as the coaching staff, who tried to force Kim to agree to be relegated to the minors before the regular season began.

He exercised his right to refuse, but he’s since seen very little playing time - only 15-at bats. Although the Orioles are top in the East American League with 14 wins and nine losses as of Sunday, Kim’s contribution has been essentially zilch.

Although he has been spending more time on the bench, Kim has also been practicing hard.

“He’s hitting off the machine a lot, and I think that’s just keeping him toned to hitting with some velocity, because when you sit for a while, getting that timing and seeing the ball coming… It’s not the same as off a pitcher, but just the velocity,” said Scott Coolbaugh, the hitting coach of the Orioles, to the Baltimore Sun after the game on Sunday in which Kim had three hits during four at-bats, the first time he’s had more than two hits in a single game.

Kim also had his first long hit on Sunday when he doubled the changeup by Chicago White Sox pitcher Mat Latos. As he improves his performance and the word about his work ethic gets around Baltimore, fans’ perspective on Kim also has seen some shift. Initially, when Kim went into the field, fans jeered at the Korean outfielder. But those jeers turned to cheers during Sunday’s game when Kim ran bases.

With two years in his contract, Kim still has some time to prove that he belongs in the big league.