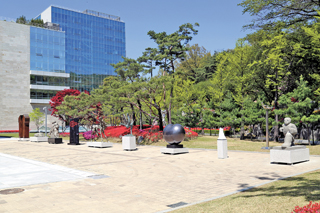 Sungshin Women’s University unveiled an ambitious plan last week to transform Mount Opae, which is actually a hill, at the university’s Unjeong Green campus in northern Seoul into a sculpture park not only for the students but also for area residents.

As the start of the project, the university commissioned nine Korean and foreign artists to create sculptures. The nine works are now on display in square at the Unjeong Green campus.

“They will be relocated to various parts of Mount Opae later,” explained Kim Sung-bok, a sculptor and dean of the college of art at the university. As one of the nine sculptors, he has presented an obsidian piece titled “Let the Wind Blow, We Must Walk in High Wind,” which depicts a human figure walking against the wind.

Among the other Koreans artists, veteran sculptor Choi Man-lin has added a heart-shaped bronze piece titled “O.” The other Korean artists are Jeon Loi-jin, Chung Kwan-mo and Chon Joon.

“From this year, we will hold an annual international sculpture exhibition and the exhibits will be added to our sculpture park,” university President Shim Hwa-jin said at a press conference last Monday.

“We also started permanent exhibitions of some painters and installation artists in our classrooms last year,” Shim continued. “Ultimately, we will transform our whole campus into a kind of art museum, so that students can be always surrounded with art. I hope our move will spread to other universities.”