A scenario from hell

A scenario from hell 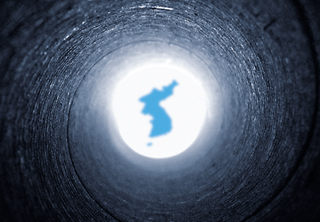 Let us imagine the Korean Peninsula in 202Q when negotiations have failed to accomplish the denuclearization of the North — or at least its nuclear freeze. In that future, the North succeeds in the miniaturization of nuclear warheads through six nuclear tests. It has the ability to attack New York City and Washington with its inter-continental ballistic missiles (ICBMs). It has also mastered the advanced technology of ablation, which allows an intercontinental ballistic missile warhead to withstand the temperatures of up to 7,000 degrees Celsius (12,632 degrees Fahrenheit), created when it re-enters the atmosphere at the speed of Mach 20.

North Korea’s submarine-launched ballistic missile (SLBM) is a more menacing weapon. The North already test-fired it from the East Sea in April 2016. It flew only 30 kilometers (18.6 miles) — far shorter than the planned range of 300 kilometers. Yet Kim Jong-un threatened that the North had become capable of stabbing the back of South Korea and the United States.

Although the missile failed to fly the entire range, the North nevertheless succeeded in completing the fundamental stages of firing SLBMs: underwater ejection, engine ignition, early-stage flight, normal flight and warhead separation. The South Korean Ministry of National Defense projected that the North will be able to deploy the SLBMs for attacks within three to four years, and the prediction was right.

Kim was not satisfied with the progress. He put more effort into developing a nuclear-powered submarines to threaten the United States by secretly reaching not only Hawaii, but also the eastern and western coasts of the mainland. These submarines required miniaturized reactors. Although it was difficult to secure the technology, the North managed to do so with help of Russian engineers. A nuclear submarine can travel a long distance underwater, far greater than conventional submarines that need to surface every one or two days. Theoretically, a North Korean submarine can approach within the 300-kilometer range of its target and attack major military installations and cities in the U.S. mainland.

Even after developing the technologies to directly threaten the United States, the North still makes various provocations against the South. The long-touted Kill Chain and the Korea Air and Missile Defense systems are not a satisfactory deterrence because the North can attack anytime and from anywhere.

The more serious concern is whether Washington will still provide the extended deterrence — including the nuclear umbrella — to the South, even risking the North’s nuclear attacks on its major cities and military bases once the U.S. mainland is exposed to North Korean ICBMs and SLBMs.

The North put the Korea-U.S. alliance to a serious test with its ICBMs and nuclear submarines. If the North attacks America, Japan will shoot down the North’s missiles with the SM-3 interceptors from its AEGIS destroyers and Pac-3 missiles, deployed in Aomori and Kyoto. But Japan’s interception capability is seriously undermined since the North possesses nuclear submarines.

The F-117As, F-22 Raptors and B-2 strategic bombers — all advanced stealth aircraft — won’t be a trustworthy shield. During the Kosovo War in 1999, the myth of stealth was broken when the U.S. military’s F-117A was shot down by a ground-to-air missile belonging to Serbian Forces. It was an accomplishment by Tamara and Kolchuga radar systems, developed by the Czech’s Tesla-Pardubice. North Korea didn’t miss the opportunity.

It lured the Czech radar developers and managed to develop its own anti-stealth technology. Although the United States pressured the Czechs not to transfer the radar technology to other countries, it was too late.

This imagination of the Korean Peninsula in 202Q — particularly the North’s development of advanced weapons systems — is not the worst scenario. It is the scenario from hell. We do not know how many more years we have before this situation becomes reality. But this is not unrealistic, taking into account the extremely rapid progresses of the North’s nuclear, missile and submarine development.

How will we counter this? There are two ways.

First, there is the proposal that Chinese Foreign Minister Wang Yi made in February on the parallel negotiations on a peace treaty and the denuclearization of the North. This process will include the establishment of diplomatic relations between Pyongyang and Washington and between Pyongyang and Tokyo; the North’s moratorium on nuclear and missile development; and suspension of the Korea-U.S. joint military drills.

The channel of inter-Korean talks is not likely to open until a new administration takes power in the South in 2018. Washington’s North Korea policy will also remain idle until the new administration’s foreign affairs lineup is completed in May or June of 2017.

This power transition period is very dangerous. This is not the time to chant some wishful mantra that the recalcitrant regime in Pyongyang will soon collapse. Finding a road for dialogue and realistic means to prevent a conflict is a must in our long journey toward peace and denuclearization.


*We do not know how many more years we have before this situation becomes reality.