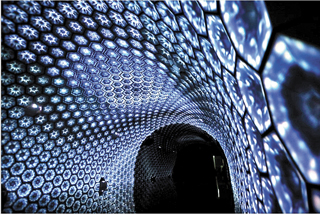 To May 8: D Museum is a new branch of the Daelim Museum west of Gyeongbok Palace that opened late last year in Yongsan District. The inaugural exhibition features lighting installation works by nine foreign artists and designers.

In the second room is London-based Australian designer Flynn Talbot’s “Primary.” In the dark, light of changing primary colors is projected on a triangular sculpture covered with many smaller triangular pyramids. And a piece by Russian visual-auditory art group Tundra, “My Whale,” is on display in the sixth room. It is a synaesthetic installation work in which the viewers see and hear regular image patterns and regular sounds, which surround them and resonate together. 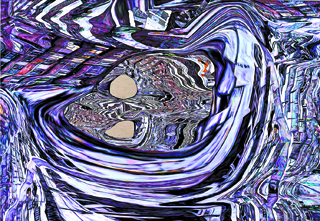 To May 15: The solo show of Jin Meyerson, an American artist based in Hong Kong and Seoul, features his 11 new paintings, which combine digital technology and traditional painting techniques.

He creates digital images by transforming photos of shipyards, factories or urban landscapes from the computer to express dynamism, speed or his emotions. Then he re-creates the images by hand.

Over the past decade, the artist has been creating digital images not with computer software but by dragging or spinning photos or his drawings across a scanner. He then manually paints the digital images. “I attach great importance to physical experience and engagement during painting,” the artist told the reporters in Seoul, when asked why he never finishes with digital images but re-creates them by painting.

And asked why he makes digital media art, he said, “If you leave a room, the painting is still there, whereas the video is turned off. I like the idea.”

Admission is free. The museum is closed on Mondays. Go to Anguk Station, line No. 3, exit 1, and walk for 10 minutes.

To May 29: The exhibition features a 150-meter-long (492-foot-long) ink painting in traditional East Asian style by Korean artist Moon Bong-sun. The painting, titled “Gangsanyeohwa” or “Picturesque Scenery,” depicts Baektudaegan, the range of mountains spanning the Korean Peninsula. Visitors can view the painting while reclining on the special chairs designed by Jihoon Ha, to follow the tradition of wayu in Korean or woyou in Chinese, which means “traveling in nature while lying down in a room.” It is the traditional way of viewing East Asian landscape paintings. 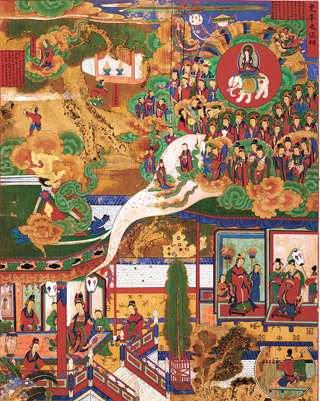 To Nov. 6: This exhibition features 40 pieces of ancient Korean paintings, sculptures, documents and artifacts related to Buddhism. Among them are seven designated of National Treasures.

The “Three Jewels” in the title refers to the Buddha, the Dharma (teachings of Buddha) and Sangha (the community of practicing Buddhists). The exhibit is divided into three sections in accordance with them.

The first section features statues and paintings depicting two important Buddhas: Shakyamuni (also known as Siddhartha Gautama, or the most well-known Buddha) and Amitabha. The highlight is a set of eight large-scale 18th-century paintings that depict “The Eight Scenes of Buddha’s Life” in vivid colors and elaborate details.

The second section features illustrated or annotated Buddhist scriptures and other Buddhist texts including the 14th-century manuscript of the Avatamsaka Sutra with golden illustrations mounted in an accordion-style album. The third section features various objects for Buddhist ceremonies.

Admission is 4,000 won for adults. The museum is closed on Mondays.